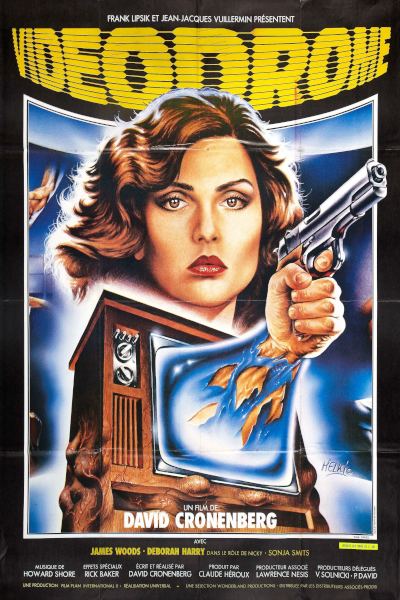 Check out our podcast episode from March 30, 2022 about this movie

When Max Renn, the hero of David Cronenberg's "Videodrome," stumbles across a Malaysian television station that appears to be broadcasting pure sex and brutality, he is stunned. "Torture, murder, mutilation!" he exclaims. "Brilliant! Absolutely brilliant, and almost no production costs. Where do they get actors who can do this?" Later on, in a cooler moment, he contemplates this new form of programming and murmurs, "I think it's what's next."

Max is a video entrepreneur, someone who considers it his business to give people what they want, however sordid or sleazy that may be. In Mr. Cronenberg's universe, which is often very clever and inventive, this doesn't make Max an evil man. It merely makes him unprincipled, and therefore vulnerable to the wicked machinations of others. In "Videodrome," these abound. So does poetic justice. Max is eventually turned into a walking personification of the sexual, violent, media-mad exploitation to which he has contributed.

It would be revealing the most eye-catching and horrific secrets of "Videodrome," which opens today at the Rivoli and other theaters, to describe this physical transformation in any detail. But Rick Baker, responsible for the film's special makeup effects, has devised some tricks that are as droll as they are gruesome, even if the gore does eventually become overpowering. He and Mr. Cronenberg, while easily fulfilling the film's horror requirements, try in addition for a more ironic, satirical style, and at times they achieve it. Though "Videodrome," finally grows grotesque and a little confused, it begins very well and sustains its cleverness for a long while.

What Max quickly discovers, with the audience way ahead of him, is that the sex-and-violence show from Malaysia is neither staged nor a foreign import. It originates in Pittsburgh, and it secretly emits a signal so powerful that the viewer is affected in unthinkable and irreversible ways. By the time Max figures this out, he is already in the grip of Nicki, a seductive and very kinky radio personality, played by Deborah Harry. Radio personality? Well, Nicki is heard giving advice on a self-help show called "Emotional Rescue." Since she is also seen putting out cigarettes on her body, the better to titillate Max, it's fair to wonder whether her on-the-air advice is really of any use.

The other mystery woman in Mr. Cronenberg's convoluted, intriguefilled screenplay is one Bianca O'Blivion (Sonja Smits), the daughter of a professor who now exists entirely as a library of videotapes. "The monologue is his preferred mode of discourse," Bianca says. Both she and Nicki, who represent opposing elements in Mr. Cronenberg's elaborate scheme, induce in Max the kind of hallucinations that are a special-effects-department's dream, as when a videocassette becomes throbbing, pulsating flesh, or when a television screen becomes a rounded, menacing mouth the size of a beach ball. Max is never sure where these visions leave off and reality begins; the viewer won't find it easy to tell, either. And there are times when it is dangerously unclear, in the midst of Max's lurid, sadomasochistic fantasies, whether "Videodrome," is far removed from the kind of sensationalism it seeks to satirize.

Mr. Cronenberg, who also directed ''Scanners,'' is developing a real genius for this sort of thing; one measure of the innovativeness of ''Videodrome'' is that it feels vaguely futuristic, even though it's apparently set in the present.

By far Mr. Cronenberg's most inspired touch is the casting of Mr. Woods, who brings an almost backhanded heroism to the horror genre. In villainous or sinister roles (in films like ''The Onion Field'' or ''Split Image''), Mr. Woods has been startling, but that kind of casting is almost a redundancy. Here, his offhand wisecracking gives the performance a sharply authentic edge. And his jittery, insinuating manner even begins to look like a kind of innocence, in comparison with the calm, soothing attitudes of the video-crazed megalomaniacs he's up against.