Let the Right One In

A Bullied Boy Falls for the Vampire Next Door 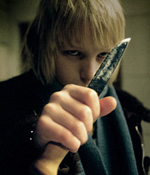 The title of the spectrally beautiful Swedish vampire movie “Let the Right One In” comes from a song by Morrissey, a romantic fatalist who would surely appreciate this darkly perverse love story. “Let the right one in,” he sings in "Let the Right One Slip In." I’d say you were within your rights to bite/The right one and say, ‘What kept you so long?’ ” These may sound like words to live by, though in the case of a film about a boy and the girl next door who may just be a vampire, they could easily turn out to be words to die for.

I’m not sure if the director Tomas Alfredson is a Morrissey fan, even if, like the singer, his movie smoothly and seemingly without effort works through a canny amalgamation of cool and hot, diffidence and passion. (John Ajvide Lindqvist, who adapted the screenplay from his horror novel, openly borrowed the title from Morrissey, a favorite.) The film’s cool is largely expressed in visual terms, in the enveloping snow, the wintry light and the cinematographer Hoyte van Hoytema’s meticulously and steadily framed compositions. There is a remarkable stillness to many of the film’s most indelible images, particularly the exteriors, which are so carefully photographed, and without the usual tiresome camera jiggling, as to look almost frozen. It’s no wonder that pale, pale little Oskar (Kare Hedebrant) looks so cold.

Pale and strange: with his light blond hair and alabaster skin, the 12-year-old Oskar appears not quite of this world, an alienation of body and spirit that causes him enormous pain but proves his salvation. The seemingly friendless only son of divorced, emotionally remote parents, he is also an outcast at school. The other children taunt him, particularly a pint-size sadist who grows crueler the more Oskar retreats into himself. But there are few other places he can go, which is how he ends up alone at night outside his apartment building thrusting a knife into a tree as if stabbing his tormentor. It’s an uneasy revenge fantasy that attracts the notice of a girl even paler than he is, Eli (Lina Leandersson), an outcast of a deadlier kind.

The bedraggled Eli drops into Oskar’s life like a blessing, though initially she seems more like a curse. Mr. Alfredson has an elevated sense of visual beauty, but he knows how to deliver the splattery goods. One of the earliest scenes features Eli’s guardian or slave (it’s never clear which), a defeated-looking middle-aged man named Hakan (Per Ragnar), headed into the night with a little black kit, the contents of which — a knife, a plastic container, a funnel (ick) — are soon put to deadly use on a strung-up victim. The ensuing stream of red is all the more gruesome for being so matter-of-fact, though the sudden and comical appearance of an inquisitive poodle quickly eased at least one violently churning stomach.

There are other interested animals in this story, and many more unsettling excuses to laugh. Yet while Mr. Alfredson takes a darkly amused attitude toward the little world he has fashioned with such care, he also takes the morbid unhappiness of his young characters seriously. Both are achingly alone, and it is the ordinary fact of their loneliness rather than their extraordinary circumstances that makes the film more than the sum of its chills and estimable technique. Eli seizes on Oskar immediately, slipping her hand under his, writing him notes, becoming his protector, baring her fangs. “Are you a vampire?” he asks tremulously at one point. Her answer may surprise you, but it’s another of his questions — “Will you be my girlfriend?” — that will floor you.

Let the Right One In