Fear(s) of the Dark 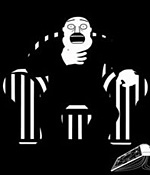 collection of superbly wrought black-and-white animated vignettes, Fear(s) of the Dark trades in disturbing youthful memories and ghastly tactility. Produced by six exceptional French graphic artists, this concise, creepy compilation isn't truly terrifying, its aim being not to deliver jolt scares but, rather, to generate a mood of ominous unease. It does so through narratively unrelated short stories whose thematic commonality is chiefly rooted in awful sensations—spiders creeping up legs, splinters wedged into a hand, the disorientation of darkness—and an underlying mood of abstract dread that's most bluntly conveyed by interludes of morphing shapes accompanied by Nicole Garcia's pretentious voiceover articulations of her personal fears of racism, conservatism and eating worms. Given its tales' loose correlation to each other, the film often feels like a demo reel showcase for its creators' prospective future projects.

The anthology's sumptuous visuals, however, make such nagging notions largely moot, its varied chiaroscuro styles thrillingly exploiting light and dark, soft and sharp angles, and mutating perspectives. A serialized segment involving a fiendish 18th-century villain taking a stroll with his four leashed hell-hounds is marked by harsh lines and jagged shadows, while a flashback-recounted episode concerning a college student's increasingly buggy relationship with a fellow female classmate—boasting slightly unreal, three-dimensional animation—captures the unnerving excitement of initial sexual encounters. Menacing surrealism creeps into most of the film's scenarios, such as a J-horror riff that filters new-kid-in-school anxieties through warped monster nightmares.

Yet this inventive anthology most outstandingly flourishes during its final section, in which a man stumbles upon a strange abode and, with only miniscule light to guide his way, navigates a drawing room, flips through a death-obsessed family photo album and finds himself stalked by a specter. Crafting visions of unsettling, primal fear, Richard McGuire strips a familiar haunted house scenario down to its iconic imagistic basics—enveloping shadows, menacing fire, looming spirits—and in the process comes up with a macabre mini-tour de force.

Fear(s) of the Dark