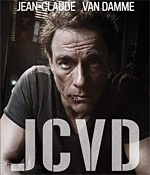 You know the man and you know the movies, but you've never seen him like this before. Jean-Claude Van Damme stars in the role he was born to play in JCVD ... as Jean-Claude Van Damme. Through his action movies of the '80s and '90s, his body of work has lead up to this: playing a washed-up movie star with serious personal and financial problems. But don't start shedding a tear for the man just yet, as this take on Van Damme is done with a touch of humility, emotion, and fun. JCVD is not the action extravaganza we'd expect, but rather a heart-felt tribute to Van Damme's greatness.

You'll know if JCVD is for you within the first five minutes, as we follow Van Damme through a single-take action sequence on the set of his latest movie. You'll enjoy this because you remember the good ol' days when Bloodsport, Universal Soldier, and Timecop ruled the box office. You'll remember when Van Damme was on top of the world as one of the biggest action stars in Hollywood. You'll realize that you miss seeing the guy on the big screen, and you'll even be a bit sad that you've turned your back on him over the years.

It's with a hint of nostalgia that will initially suck you into JCVD, but what will keep you there is the story of a man with nothing to lose in the fight of his life. He's a man fighting for the custody of his daughter, a man fighting for meatier roles, and a man fighting for the dignity an action hero so rightly deserves. What better way to showcase Van Damme's struggle with life than to throw the guy in a real-life "action movie" situation? Can Van Damme be more than just a reel hero? Yes, he can -- in more ways than one.

JCVD is played for real, but is also played off the ridiculousness of the situation -- ridiculous in that, after all these years, people still see Van Damme as one of the greatest movie stars of all time. Even one of the bank robbers suffers from a serious case of Van Damme hero-worship, offering a great number of laughs as conversations arise about John Woo (Hard Target), and what a shame it is that Van Damme keeps losing roles to Steven Seagal. JCVD winks at Van Damme's career highlights and fumbles, but does so with an air of idolized respect. JCVD isn't making fun of Van Damme -- Van Damme is making fun of himself, and that my friends, is why Van Damme (and JCVD) is so awesome.

Besides the overall premise, I really dug the storytelling structure. While JCVD doesn't take itself too seriously, it does tell the story with a sense of realism, without hitting us over the head with it. The supporting cast rocks hard, from the town's police chief (François Damiens), to Van Damme's bank-robbing admirer, but it's Van Damme's self aware approach to playing himself that really stands out, delivering a believable performance the likes you have never seen ... from him, at least.

JCVD is not just an enjoyable film about a washed-up Hollywood star, but a film with a message: don't be quick to judge people, learn to take responsibility, and understand what it means to be a hero. JCVD was made for Van Damme fans who have always wanted to see the guy succeed, who have seen the greatness of Van Damme through all of his crappy movies, and who appreciate who Van Damme is and why he's awesome. Without even trying, Van Damme reaches the same *wink-wink* hero status of Chuck Norris, as yesterday's action hero who's now funny as the punchline to a joke. But unlike Norris, Van Damme embraces his washed-up action hero appeal, pokes fun at himself, and pulls off the greatest performance of his career. You want greatness? See JCVD and witness one of the greatest comebacks of all time.