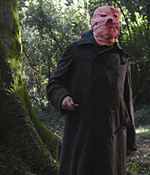 Timecrimes is a tremendously entertaining bit of Kafka that whirlpools down into The Twilight Zone. Spanish director Vigalondo's first feature film is an enigmatic, interlocked series of increasingly inevitable torments for its protagonist and one helluva blast to watch. Predicated on the same sort of trippy, circular logic beloved by conspiracy theorists and collegiate stoners alike, it's a time-travel head-trip of a film, and it succeeds in messing with your mind almost as much as it does with those of its own characters. Fair warning, hippie: Do not drop acid before seeing this film. Similar in tone to Shane Carruth's too-smart-for-its-own-good Primer (in which a pair of Dallas engineers inadvertently whip up a time machine in their suburban garage) but far more engaging, Timecrimes has nabbed a spate of awards, among them the Next Wave award at 2007's Fantastic Fest. It's easy to see why: Vigalondo's triple command of surreal compositions, nerve-raping suspense, and the ability to draw out scarily emotional performances from a cast that includes, in a major role, himself is unassailable. (Director of photography Flavio MartÃ­nez Labiano, working on a shoestring budget and filling odd corners of the frame with all manner of important information, is no slouch either.) As so often happens in films about the male self, it all begins with a girl, before beginning again and again and again. Paunchy HÃ©ctor (Elejalde, in a breakthrough role) is moving into his new rural, woods-enveloped home with his wife, Clara (FernÃ¡ndez). Stretched out on his lawn with a drink in one hand, HÃ©ctor spies a bit of color in the otherwise dense foliage that borders his property. It turns out to be a nude woman (Goenaga), posing as if she were some sylvan wood nymph, and HÃ©ctor is immediately and understandably curious. His investigation, however, leads him nowhere â€“ and everywhere â€“ fast. It's impossible, or maybe just unwise, to reveal any more of Timecrimes' plotting here. Suffice it to say that while you may think you know what's going on in Vigalondo's world, you don't, not really. It's a trip, after all, and getting there is all the fun. — Marc Savlov, The Austin Chronicle