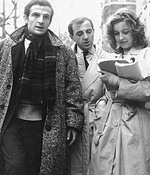 Shoot the Piano Player was greeted in France as something of a frivolous, disappointing follow-up to the 28-year-old filmmaker's quasi-autobiographical, Cannes-winning debut, The 400 Blows. Here, where it opened a few years later in the wake of Truffaut's ultra-romantic third feature, Jules and Jim, Shoot the Piano Player was an instant art-house classic--in heavy rotation at the old Bleecker Street Cinema throughout the mid-'60s and approvingly cited by Bob Dylan (for its presumed music uber alles message!) in the Times They Are A-Changin' liner notes.

Shoot the Piano Player has a nominal, tragic gangster plot (adapted from David Goodis's 1956 pulp novel Down There) but, hardly a hardboiled noir, it's pure atmosphere. Powered by Georges Delerue's haunting score--mainly the sad, jaunty tune that the eponymous pianist Charlie (singer--but not here--Charles Aznavour) pounds out in a neighborhood saloon at the movie's beginning and end, Shoot the Piano Player is the essence of a drizzly autumn afternoon in some shabby arrondissement.Wreathed in Gitane smoke and heroic self-pity, the short, heartbroken hero is something like Woody Allen's ego ideal--a genius performer who shares his endearingly self-questioning thoughts with the audience, wears a trench coat with aplomb, and, when necessary, can escalate from morose catatonia to murderous rage. Ambience rules. Charlie works in the most cheerful of dives, sleeps with the friendliest (and dishiest) of whores, is loved by the sweetest of waitresses (Marie Dubois, totally cool in her matching trench coat), lives with the cutest of kid brothers, and suffers the stupidest of older ones. Even the bad guys are droll.Forty-eight years later, Shoot the Piano Player retains an abundance of exciting (and excited) filmmaking--the clever use of contrapuntal sound, the hilarious cutaway showing the drastic result of someone's solemn oath, the still-fresh poetry of an extended, mortally wounded death slide down a snowy hill. The mood is in constant flux, and the garrulous characters surrounding taciturn Charlie provide plenty of unexpected digressions.

Shoot the Piano Player not only reconfigured the Hitchcock slapstick romantic thriller but also popularized a number of the innovations--arcane references, shock editing, narrative asides--tossed off by Jean-Luc Godard in the original nouvelle vague neo-realist noir fairy tale, Breathless (a movie for which Truffaut supplied the premise). Unlike that of his onetime pal, however, Truffaut's form of self-reflection is ultimately a way of playing the audience. The difference between his movie and Breathless is the difference between talent and genius.