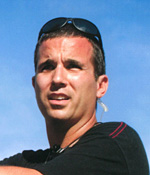 Dominic Aluisi remembers when filmmaker Phil Solomon visited his CU Film Studies class and said, "Whatever you do, don't become a first assistant cameraman. It is the hardest job there is." Dominic ignored his now-friend's advice and started working on features and commercials. Since then, Aluisi has worked with many prolific directors including Ridley Scott, John Frankenheimer, Michael Mann, and he finished his third film with Ron Howard last fall (Angels and Demons) as the first assistant cameraman. Aluisi is the long-time focus puller for Salvatore Totino, ASC, and has had the opportunity to work with many other brilliant cinematographers including Harris Savides, ASC, Robert Richardson, ASC, and Lance Acord, ASC. As a first assistant cameraman, Aluisi's primary responsibility is to keep the film in, or out of, focus, but must also technically master and be able to operate every piece of camera equipment. For Dominic Aluisi, the camera is the best place to learn from directors and cinematographers about the art of making films. He's worked with many other brilliant cinematographers and shares his experiences tonight.