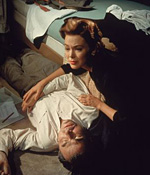 Fortunately for me and about 100 other people, the Castro Theater recently had a screening of this incredibly rare, widescreen, Technicolor marvel. And I have to add my praise to those respectable folks listed above.

James Mason (who also produced) stars as Ed Avery, a schoolteacher and taxi-cab dispatcher who finds he's suffering from a rare disease that will kill him inside of a year if he doesn't start taking Cortisone. His wife Lou (Barbara Rush, from It Came from Outer Space and When Worlds Collide) struggles to keep everything on track, but finds life more and more difficult as the drugs begin to affect Ed very strangely. He takes to playing football in the house with their son Richie (Christopher Olsen, also in The Man Who Knew Too Much), and to berating him when he can't catch a pass.

Ed and Lou's best friend Wally Gibbs (a young and handsome Walter Matthau) tries to help too, but Ed suspects him of fooling around with his wife. Eventually, Ed gets the idea to sacrifice his son just like Abraham did in the Bible. When Lou reminds Ed that God stopped Abraham, Ed roars, "God was wrong!"

Director Ray, along with his contemporaries Douglas Sirk and Vincente Minnelli, was a master of the widescreen melodrama. When Cinemascope was first invented, directors used it most naturally for spectacles and epics. But Ray and the others realized that its empty spaces could be used just as potently.

Most of Bigger Than Life's action takes place within the Avery's home, which is decorated with posters and maps from the world's most exotic countries -- further underlining the fact that the Averys are trapped in middle America with all its bland realities. Ray makes the most of the ordinary household staples -- the symbolic football on the mantelpiece, Ed following his wife around and turning off the lights, and the even more symbolic staircase, which like Ed, goes both "up" and "down." Ray also includes one of the first and most effective uses of a cracked mirror.

Indeed, the house perfectly reflects and strains against Mason's masterful performance as the good-natured man turned bad as he begins to concoct ways of getting more and more Cortisone to feed his ever-growing habit. He's either flying high and in a great mood, or he turns dark and murderous. The best scene has him giving math lessons to young Richie, poised over the back of the chair like a hawk -- and his shadow even bigger and more sinister perched on the wall behind them like a vulture.

According to the Psychotronic Video Guide, Bigger Than Life got away with more than it should have at the time. Its violent nature (along with that of The Man With the Golden Arm a year earlier) caused censors to tighten their grip on movies of the 1950s. But it should be noted that Ray demonstrated his cautionary tale without use of overt violence or preaching of any kind. Instead he used his definitive brand of cinematic poetry, which is as it should be.