Gorgeous Cinematography Shines in a Rural Mennonite's Test of Faith 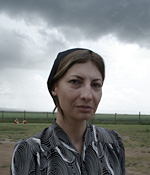 Carlos Reygadas' "Stellet Licht," seen in festivals around the world and recently screened at the Museum of Modern Art in New York, is an unqualified masterpiece. Using untrained actors from several Mennonite communities, speaking in the Mennonite dialect of Plautdietsch, the film tells a profound yet simple tale of Johan, a farmer in Mexico's Mennonite community who is in love with two women: his wife (the mother of his seven children), and a woman who runs a nearby ice cream stand. Despite the bare bones simplicity of the plot, the film manages to delve into the mysterious heart of desire, loss, joy, and transcendent love, and it elevates a familiar situation to the level of a universal myth. The breathtaking widescreen photography and the majestic slow pace of the entire film are overwhelmingly beautiful. The sound design, in which the ordinary sounds of country life are expertly composed into a music-like tapestry, and the sounds of cows or trucks become powerfully significant aural icons in the storyline, is one of the most beautiful I've ever heard. (The film has no music, except for two songs heard within the context of the action.)

The camera often zooms in to a scene extremely slowly, gradually pulling the viewer inside of the emotional world of each scene. One feels that the camera pulls in so slowly from an extreme sensitivity and respectfulness towards the characters. Sometimes, as in two scenes in which we see a character weeping with grief, the camera pulls in slowly because the pain is so intense. (I have never seen weeping of such stark, human intensity in another film.) At other times, the camera seems to pull in slowly because there is so much rich detail in the scene that we need time to digest it. One scene begins with a wide shot of the exterior of a garage, and gradually brings us to the inside of a pit where Johan's friend, a mechanic, is working on an engine block. The camera's slow zoom works in tandem with a masterful sound mix, in which the sounds of cars and the countryside around the garage give way through imperceptible degrees to the sounds of the work inside of the garage. When we finally arrive inside the garage pit, the scene has the resonance of a trip to the pits of hell which rivals Dante or a Greek drama. (The mechanic is one of the two people with whom Johan shares the dilemma of his conflicted feelings.)

One of the great strengths of the story is that Johan does not let anyone other than his friend and his father know about his love affair. The story is not allowed to degenerate into an obvious social drama about a small-minded insular community condemning the lovers. Instead, it becomes a universal tale about the pain of feeling you have taken the wrong path in life.

With his simple, mythical storyline, mesmerizingly beautiful images, rich sound mixes, and majestically slow pacing, Reygadas is really pursuing one strategy throughout the film. He creates fields of energy: emotional energy, visual energy, and sound energy. The he orchestrates these fields, and allows the viewer to be exposed to them for such long periods of time that our inner spirit is able to resonate with what we are watching with an incredible intensity. If you see "Stellet Licht" and you are at all open to this process of sympathetic resonance, you will feel every desire, every loss you have ever felt, every response to trees, rocks, grass, the sky, to the sounds of crickets. You're going to be resonating so strongly your seat will be shaking. When the story finally elevates, in a magical twist, from the level of the human to the purely mythical and sublime, you're going to feel like you're flying through the roof of the theater.