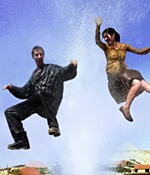 Though not strictly a silent movie, Veit Helmer's latest is a delightful fable sans dialogue, like his well-traveled debut "Tuvalu." While the market for this kind of parabolic former-Eastern-bloc whimsy isn't what it used to be, "Absurdistan" is too enjoyable to go unappreciated offshore, at least by fests, specialty DVD distribs and upmarket telecasters.

Titular mountain village is so isolated that it's been virtually forgotten, claimed by no country since perestroika. An underground water delivery system constructed generations ago now provides barely a trickle, and local men are too lazy to fix it. Fed up, their industrious wives strike at the one thing these virility-proud husbands can't do without: Not only do they withhold sex, they create an "iron curtain'" separating the genders, and perform armed guerrilla maneuvers. Meanwhile, young Temelko (Maximilian Mauff) frantically tries to repair the pipe by himself, having been told his long-awaited deflowering of Aya (Kristyna Malerova) must take place during a current, short-term celestial alignment. Physical comedy, charmingly primitive f/x, robust perfs and imaginative design contribs make "Absurdistan" a treat for the eyes and funny bone.