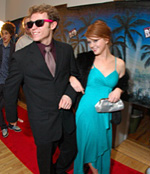 In 2008, the BFD (Big Freakin' Deal) Film Fest screened the top 20 University of Colorado at Boulder student films submitted before a sell-out crowd at the Old Main Chapel Theater. Awards will be given in the following categories: Animation, Experimental, Documentary, Narrative, Best Bad Movie, Best Photo Essay, Best of Fest, and Audience Award.