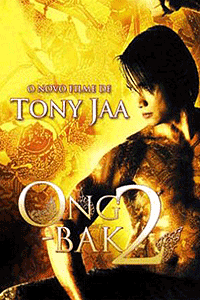 Back in 2003, a little Thai movie called Ong Bak introduced the world to an elephant-herder-turned-martial-artist named Tony Jaa. Directed by Prachya Pinkaew, the movie became a global sensation and rocketed Pinkaew and Jaa into the international celeb-o-sphere. They quickly collaborated on a follow-up called Tom Yum Goong (aka The Protector) that became the most successful Thai film ever released in America. Two times lucky, the Thai studio Sahamongkol Films eagerly green-lighted Jaa's dream project: Ong Bak 2 (Magnet Releasing), to be written, directed, produced, choreographed, and starred in by Jaa himself. What followed was a motion-picture meltdown, with Jaa disappearing into the jungle, Mr. Kurtz-style, as star and studio went to war.

With 70 percent of the film in the can, the massive production ground to a halt when, depending on whom you believe, either a) money promised by Sahamongkol never materialized, and Jaa went bankrupt, paying the crew out of his own pockets until even his electricity was cut off, or b) Tony Jaa went way over budget, and when Sahamongkol shut off the money faucet, he threw a snit fit.

Either way, Jaa disappeared for two months, abandoning one of the most expensive Thai movies ever made. When the press picked up the story, everyone went crying to the cameras, with Jaa claiming that he was being followed by men in safari suits who wanted to kidnap him and Sahamongkol claiming that Jaa was a disloyal family member who was out of control. Finally, the deputy commissioner-general of the police interceded and negotiated a truce. The result? Prachya Pinkaew, who had fallen out with Jaa, was brought in to oversee the remainder of the film; Jaa's mentor, Panna Rittikrai came onboard as official co-director; Jaa was put in front of the cameras; the movie went three times over budget; and it became the top-grossing Thai film of the year.

Just to be clear, Ong Bak 2, takes place 500 years before Ong Bak 1 and it starts with Jaa slapping an elephant in the brain so hard that an entire herd of them bow down before his might. That's the kind of awesome he's selling. By the time we hit the half-hour mark he's fought a samurai, wrestled a crocodile, and killed a vampire. Also: elephant surfing.

The plot sees Jaa orphaned and raised by a band of jungle pirates. They teach him to fight in many different flavors, and then flashbacks break out like a rash, and we learn that Jaa's parents were royalty and that he needs to take revenge on the people who killed them. So he does. The end.

Jaa shot the majority of this movie himself, and it's staggering to see just how much crazy is inside his head. Filmed in every color of the fungus, from lichen-gray and mushroom-brown to rich, moldy black and rotten-mildew green, the screen is soaked in liquids. The few times it actually stops raining, someone immediately spits, bleeds, or drools on the camera. The visuals are primitively powerful, as bold and savage as pounding tom-toms, all warped short lenses and bizarre Dutch angles. Half the dialogue is maniacal laughter; the other half is savage screams.

The action, however, will cause the scales to fall from your eyes. Nourished on anemic action sequences full of shaky-cams, rapid-fire editing, and quick cutaways, American audiences are not prepared for Jaa's 20-minute essays on human bodies causing massive trauma, filmed in long shots and long takes that rule out camera trickery. The final, epic action scene uses a few wires and a little bit of undercranked camera work to speed up a movement here and there, but otherwise it's a lesson in disbelief: No one can move this fast; no one can jump this high; it's impossible. But the impossible is what Jaa has for breakfast.

There are an incredible number of fighting styles and forms on display in Ong Bak 2, but that's something for the fight geeks to notice. Regular audiences are instead going to notice Jaa's limitations. An accomplished martial artist and a nutso visionary director, he hasn't yet figured out how to be an action star. Jackie Chan used to beat down two, three, 20 guys at once, banging out a funky, syncopated rhythm like a Mickey Hart drum solo. Jaa subscribes to the shifting-semicircle technique: His opponents form a semicircle around him, and they shift from one foot to the other as if they have to go to the bathroom, running at him politely one at a time.

More of a problem is how the on-screen Jaa seems to take no pleasure in his skills. In person, Tony Jaa is a charming individual, but put a camera on him and his personality drains away, leaving behind a grim blankness. Dan Chupong, Thailand's other martial-arts star, appears as a black-lipstick-wearing bad guy at the climax, and in his 10 minutes of screen time, he leaves more of an impression than Jaa does in the previous 70. While many actors get a stunt double, Jaa is the only actor I know to have a smiling double, Natdanai Kongthong, who plays the young Jaa for a few brief, refreshing minutes.

Oddly enough, it's when the action of Ong Bak 2 stops that this funkadelic freakshow shines. The screen is stuffed with a gallery of grotesques, some of Thailand's best character actors, who spend their time bleeding, bellowing, and slurping up eyeballs. There's the loopy moment in the middle when Jaa pulls the emergency brake and stages a riveting folk dance, performing a perfect khon, Thailand's most rigorous dance form. And how can you hate a movie that climaxes in a moment of deus ex pachyderma before springing a "clap if you believe in fairies" audience-participation stunt designed to bring on an Ong Bak 3 through sheer willpower?

Apparently, it worked. Ong Bak 3 is slated to hit screens by the end of this year. Given the madness on display in Ong Bak 2, I expect it will be set in Precambrian Thailand; and Tony Jaa will play a trilobite taking revenge on the nautiloids who killed his parents; and using his martial arts powers alone, he will grow his very own exoskeleton on-screen without using special effects or trick photography.