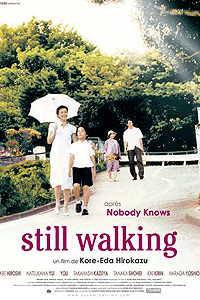 The Yokohama clan gets together every year at the elderly parents' seaside-town home to commemorate an eldest son's death. It's an occasion not looked forward to by all -- or perhaps anyone -- despite general efforts at good cheer. Particularly reluctant are surviving son Ryota (Hiroshi Abe), who feels the brunt of his elderly parents' thinly disguised disapproval of his art-restoration profession and his new bride, Yukari (Yui Natsukawa). She's anxious to impress the in-laws, and have them accept as family her child (Shoehi Tanaka) by her late first husband.

But Ryota's biggest complaint is that his blunt-spoken mother (Kirin Kiki) and, in particular, his gruff father (Yoshio Harada) still treat him like a failure compared to shining-star Junpei, who died saving a drowning child. All their hopes were pinned on him; even long dead, he's the yardstick by which Ryo is judged.

No such expectations are laid on daughter Chinami (You, the squeaky-voiced abandoning mother in "Nobody Knows"), a garrulous flake whose amiable car-salesman husband (Kazuya Takahashi) and two rambunctious children don't bother brooding over any family conflicts, past or present.

Food preparation, meals, child play, stolen one-on-one chats and other routine events fill the hours, with Chinami and her family driving home at day's end while Ryo and his wife and stepson stay the night. One notable occurrence is the visit by the boy Junpei rescued, now a corpulent, rudderless young man whose squirming discomfort the still-grieving parents take unseemly pleasure in each year.

Despite such unpleasant moments -- while allowing them their good sides, Kore-eda doesn't shrink from painting the elders just as Ryo sees them -- "Still Walking" is often quite funny, and suffused with warmth even amid discordant notes. This family's relationships are compromised, probably for keeps, but not broken. A bittersweet yet stubbornly upbeat fade is well earned before a spoken coda and epilogue scene that spell out sentiments already implicit in pic's subtly revealing body.

Though almost exclusively limited to unremarkable interactions inside the parents' home, the feature never feels meandering or claustrophobic in the least. Credit is due to the unobtrusive but invaluable contributions of Yutaka Yamazaki's lensing and Kore-eda's editing as much as the latter's incisive writing; another spare but perfect element is Gontiti's acoustic-guitar score. Perfs, including juvenile ones, are just right.