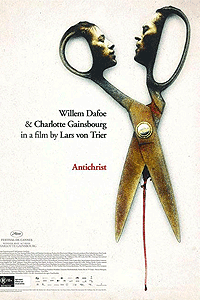 Lars von Trier’s new film Antichrist opens with the writer-director’s name scrawled crudely on a huge title card, which makes for an apt overture. Antichrist is a boldly personal film, tossing all von Trier’s ideas about faith, fear, and human nature into an unfettered phantasmagoria, full of repulsive visions and fierce scorn. It’s also the most lush-looking movie von Trier has made in about 20 years. Antichrist starts with a gorgeous black-and-white prologue—spiked, in typical von Trier perversity, with explicit sex and operatic tragedy—then moves to woodland sequences where the edges of the frame look subtly distorted. Ever since he helped devise the Dogme 95 restrictions, von Trier has been giving himself handicaps before he starts a film, but nothing has been left out of his bag of tricks this time.

Antichrist stars Willem Dafoe as a touchy-feely therapist who tries to help his wife Charlotte Gainsbourg deal with her grief over the accidental death of their toddler son. He asks her to dump her medication, and to trust him as he has her confront her fears in a series of increasingly corny exercises. He demands that she come with him to their cabin in the woods, at a spot called “Eden,” so they can look directly at what she’s afraid of. But when they get to Eden, Dafoe finds the local flora and fauna behaving strangely, and he discovers that Gainsbourg’s fears may be tied to the eternal primal struggle between men and women. Soon his figurative trip into her personal hell turns unsettlingly literal.

Cinema’s leading Brechtian wouldn’t seem like the best choice for a visceral examination of real emotional pain, but von Trier makes Antichrist about how aesthetic control can be as impotent as therapeutic control when it comes to dealing with nature at its wildest. He does this first satirically, by subtly mocking Dafoe’s platitudes (Where would you place your fears on a pyramid chart?), then turns on the audience, subjecting us to disgusting sexual violence as Dafoe descends into his wife’s nightmares. The shift is triggered when a fox announces “Chaos reigns!”, and anyone who rolls their eyes at that moment may have trouble stomaching Antichrist. Truth be told, the movie is filled with a lot of metaphysical mumbo-jumbo, but the images stick, and the audaciousness of what von Trier’s trying to execute here is hard to shrug off. He’s dumped all the crap in his head into a different kind of horror film: one that imagines what it would be like to be trapped inside the mind of a depressed arthouse filmmaker.