Tim Burton. Jack Nicholson. What More do U Need? 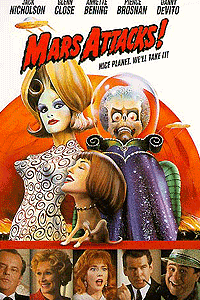 
"I'm not quite sure what to say about Mars Attacks!, which is obviously the work of a deranged genius. When Tim Burton's twisted alien invasion comedy really works, it's breathtaking and hilarious in equal measure. And when it doesn't work, it's just dull. I'm not even sure it works more often than it doesn't, but where it counts -- that is, when this gleefully evil invading force from the red planet gets down to the business of blasting us to kingdom come -- Mars Attacks! is brilliant.

"Mars Attacks! is based on a rather unsavory series of trading cards released by Topps in the 1950s, and it takes its cues from the same sources as this summer's Independence Day -- old alien invasion flicks, disaster movies, and big-budget special effects extravaganzas. But unlike Independence Day, which was a painfully middle-of-the-road appeal to the hearts, minds and wallets of America, Mars Attacks! has a fully developed and very personal sense of wonder about it. The big difference is that while Independence Day celebrated the resilience of human beings, Mars Attacks! portrays us as the greedy and hapless schmucks that we are.

"The title sequence is just splendid -- an incredible swarm of flying saucers rises out of the canals of the Red Planet and then storms Earthward through the solar system in formation. The spinning metal saucers are dead ringers for the invading forces of movies past, and their first appearance on the big screen in combination with Danny Elfman's thundering, theremin-driven score is absolutely jaw-dropping. It's so overwhelming that, I swear to you, I had trouble breathing.

"The movie lays low for the next 40 minutes. We get a glimpse of the alien leader, resplendent in a purple-sequined cape, when a television message is broadcast to the people of the world -- naturally, the only way to communicate with earthlings is to preempt our regularly scheduled programming. But mostly, the first act is spent developing characters, setting up mildly comic situations, and drawing a quirky but dishearteningly drab picture of America according to Tim Burton. It's a good thing that the most compelling personality in the movie belongs to the aliens, because Burton's just not interested in making more than caricatures out of his human stars.

"Anyone who comes to Mars Attacks! expecting to see a lot of one favorite actor is bound to be disappointed -- with few exceptions, these characters are dispatched as the film progresses. Jack Nicholson is a lot of fun as the President of the United States but fizzles as a sleazy Las Vegas hotel developer. Rod Steiger does an amusing enough take on Dr. Strangelove's Buck Turgidson, Glenn Close brings some star power to the role of the First Lady, and Martin Short is a Presidential aide who meets the Martians in the White House's "Kennedy Room," a secluded nook where he unwittingly tries to seduce an alien dressed up as a big-haired, pointy-breasted sexpot (Lisa Marie, the Burton flame who played Vampira in Ed Wood) -- in an earlier scene, it's made clear that the aliens studied human sexuality in the pages of an old issue of Playboy.

"Sarah Jessica Parker hosts her own TV show and Michael J. Fox is her newsman husband. The octogenarian Sylvia Sidney has a funny part as the old woman who cackles, "They blew up Congress!" and plays a decisive role in the defeat of the alien menace. Jim Brown and Tom Jones are the film's Vegas-based heroes, and director Barbet Schroeder (Reversal of Fortune) has a funny cameo as the unfortunate French president. Also on hand and underutilized are Annette Bening, Pierce Brosnan, Pam Grier, Lukas Haas and Natalie Portman (the latter two also show up in Woody Allen's Everyone Says I Love You).

"The real stars, of course, are the computer-generated Martians, and they're fantastic. With bare brains glistening atop their grinning skull-faces, round egg-eyes with red pupils darting this way and that, these animated invaders are malevolence incarnate -- Joe Dante's Gremlins are the closest equivalent in recent memory, but Burton's little monsters are more inventive. The film's raison d'etre are the scenes of crimes against mankind -- the most famous monuments of the world crumble under the alien assault, Easter Island is turned into a bowling alley, and the nasty little buggers perform hideous medical experiments on captured humans. The sheer level of mayhem is staggering, especially when the aliens make their first attack, blasting human beings into iridescent skeletons. Parents are urged to pay special attention to the PG-13 rating -- it's earned.

"The special effects vary from charming to astonishing to deliciously cheesy, and at least a couple of shots of mass destruction seem to have been engineered specifically in response to Independence Day, although Mars Attacks! was in production long before that film's release. Cinematographer Peter Suschitzky, who makes the most of Wynn Thomas's wildly imaginative production design (Thomas helped define the Spike Lee style), actually took time off from his Mars Attacks! regimen to shoot Crash for David Cronenberg. Cronenberg's movie is far more somber, but Mars Attacks! is a similarly elegant nightmare. This is not a nice movie. (And which studio executive was duped into giving Burton $70 million to make it?)

"By setting the film's final scenes in the nearly empty, holocaust-ravaged America that Independence Day conveniently avoided, Burton's invasion epic suggests that the world we've got may not be worth saving until many of the people on it are dead. The victims of his invasion are naive, greedy, or disastrously self-absorbed -- and a good thing, too, since the movie's wicked charm is dependent on our ability to take this invasion partly as a wish-fulfillment fantasy. The surviving cast members are the innocents and the entertainers, who triumph by determining that the alien invaders -- the ultimate elitists -- are actually susceptible to the kitschiest strains of American pop culture. Ultimately, this messy masterpiece is the year's [1996] funniest comedy and a weird, winking affirmation of the power of the people."
--Bryant Frazer