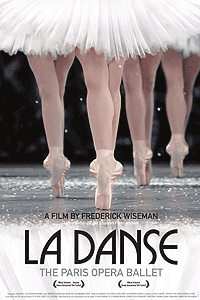 Frederick Wiseman has been making documentaries for the last 40 years, turning a sharp eye on a huge number of social and cultural institutions. His new film, "La Danse: The Paris Opera Ballet," demonstrates that his skills are undiminished. While several of his documentaries, going back to "Titicut Follies" in 1967, had a muckraking edge, his new film is a more restrained, straightforward chronicle of the rigors of working in a major ballet company. Although the film runs close to three hours, it is consistently engrossing. Dance fans everywhere will savor the loving depiction of artists at work. Those who have never seen Wiseman's work may need to adjust to his characteristic style, which eschews narration and does not even include title cards identifying the principals in the ballet company. Eventually we get to know the company's artistic director, Brigitte Lefevre, some leading dancers like Aurelie Dupont and Laetitia Pujol, as well as choreographers and ballet masters. But the film is not designed as an in-depth portrait of any of these individuals. And during the time that Wiseman filmed the company, there were no major conflicts to add dramatic juice to the chronicle. Instead Wiseman succeeds in giving us a feel for the day-to-day regimen of a major artistic company. (Robert Altman took a similar quasi-documentary approach to his fictional film, "The Company," about the Chicago Joffrey Ballet.) In addition to filming rehearsals and performances, Wiseman visits the costume department, makeup room and even in one scene of the subterranean sewers, seems to offer an homage to one of the famous denizens of the Paris Opera House, the Phantom of the Opera. Wiseman acknowledges the financial imperatives that underlie every artistic institution. In one meeting, Lefevre and her staff negotiate over just how much access to the company some rich donors will be offered. In another scene, an administrator explains to the dancers the demands of their retirement plan. Most of the film is devoted to watching the dancers at work, either in rehearsal or on stage. We see a mixture of classical ballets and modern works devised by avant-garde choreographers such as Pina Bausch. In these sequences Wiseman, working with his regular cinematographer John Davey, achieves a series of triumphs. It's hard to remember another dance film that has been so exquisitely photographed. Wiseman's camera is close enough to see the muscles in the dancer's legs, but the director knows when to pull back to give us an overview of the entire mise en scene. Even people who are not aficionados will be mesmerized by these beautifully framed sequences. Dance lovers will be in hog heaven. — S. Farber, The Hollywood Reporter