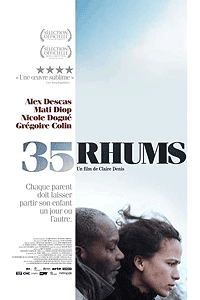 French director Claire Denis understands the benefits of slowly disclosing information, the sort of things other directors often rush to provide. In her latest movie -- 35 Shots of Rum -- Denis takes us into the lives of a handsome father (Alex Descas) and his gorgeous daughter (Mati Diop).

The virtues of 35 Shots of Rum -- and there are many -- revolve around Denis' exquisite patience: She allows her characters room to breathe, and extends the same courtesy to us. Minute by minute, it's not always easy to read the intentions of Denis' characters, but by the movie's end, we've gained an understanding of lives that are at once radically isolated and deeply connected. And, yes, the contradiction makes perfect sense.

Descas' Lionel works as a motorman on the Paris Metro; Diop's Josephine studies social sciences at a university. Father and daughter share an apartment outside Paris. It takes a moment or two before we even realize that Lionel and Josephine are father and daughter. It takes even longer to learn something about Josephine's late mother and about why Josephine and Lionel seem to have fallen into a pattern in which their roles aren't always clear.

Strong and imbued with a deep sense of solitude, Lionel knows that his grown daughter eventually must get on with her life; the bond between father and daughter needs to be stretched, though not broken.

Two additional characters fill out the movie. Nicole Dogue plays Gabrielle, a cab driver who lives in the same apartment building as Lionel and Josephine. Slowly, we learn that Gabrielle often took care of Josephine as a child. Somewhere along the line, Gabrielle and Lionel became lovers. For him, it may have been a matter of convenience; for her, it seems to have been an affair of the heart.

Noe (Gregoire Colin) also lives in the same building. He inherited his apartment from his late parents. He has his eye on Josephine, and they seem interested in each other in ways neither of them has fully understood.

I have yet to mention that all of the characters -- with the exception of Noe -- are black. Lionel is a first generation African transplant to France, as are many of his colleagues at work. This may account for some of Lionel's sense of isolation, but to overplay that hand would amount to a socio-political affront to the inner lives of Denis' characters.

Everything that happens in 35 Shots of Rum -- named for a feat of drinking that Lionel performs on special occasions -- serves to illuminate these inner lives, even when Denis shines her light indirectly. I can't think of a recent movie that so perfectly captures feelings of loneliness and relatedness in characters whose lives never steer a ruinous course.

What's at stake for Lionel and Josephine? Only the shape of the rest of their lives. We know that each of them will find a future in which a bit of the past insists on remaining present.