With director Randy Olson in person 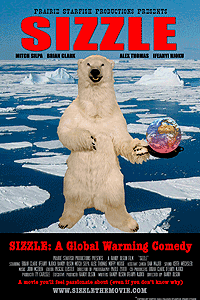 "Sizzle" is a novel blend of three genres -- mockumentary, documentary, and reality. Scientist-turned-filmmaker Dr. Randy Olson, is a fan of Al Gore's global warming movie, but asks, "Where are all the scientists?" He sets out to make his own documentary about global warming featuring scientists, but the only backers he can find are a fabulously flaky couple who top their list of people they want him to interview with Tom Cruise (not a scientist but a Scientologist -- "most people don't know the difference") and Kate Winslett ("she does a good British accent which makes her very believable"). They also give him a cameraman who is a global warming skeptic and argues with the climate scientists they interview. Through a series of interviews and an eventual road trip to New Orleans the movie delves to new depths in an effort to understand the confusion around global warming, which may be the most serious problem to ever confront humanity. Or not. -- Randy Olson

Those of you that saw FLOCK OF DODOS: THE EVOLUTION-INTELLIGENT DESIGN CIRCUS here at IFS are already familiar with the work of director Randy Olson. Tonight you can see his latest film and meet the filmmaker in person!