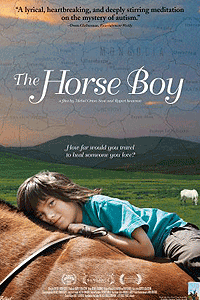 What do you do if your autistic son is unresponsive to treatment yet inexplicably soothed by the proximity of horses? If you are Rupert Isaacson and his wife, Kristin Neff, you take him to a country where horses are as essential as water: Mongolia.

“The Horse Boy” is a record of that extraordinary journey, a grueling weekslong trek across the plains of Mongolia in search of shamanic help for Rowan, their 5-year-old son. Plagued by inconsolable tantrums, chronic incontinence and severe dissociation, the boy is no one’s idea of a congenial travel companion; but as his parents endure discomfort, defeat and ritual floggings (“You’re not allowed to scream,” Mr. Isaacson warns his deep-breathing spouse), the director and photographer, Michel Orion Scott, finds a windswept beauty in surroundings so barren that the shores of Lake Sharga appear like a mirage.

Resolutely unvarnished (“I didn’t expect an urban slum,” Mr. Isaacson remarks on arriving in the capital city, Ulan Bator) and astonishingly intimate, “The Horse Boy” chronicles a couple in emotional and physical extremity. Though experts are on hand — including Dr. Simon Baron-Cohen, a Cambridge University psychologist and eerily look-alike cousin of the comedian Sacha — to tell us how little they know about autism, the film is not a primer on this heartbreaking condition. Instead it recounts a deeply personal, highly subjective and inarguably thought-provoking story of one family’s quest for a certain kind of peace.