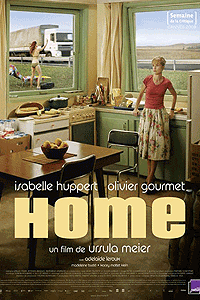 Described by director Ursula Meier as "a road movie in reverse," Home is an assured and unsettling comedy. Marthe (Isabelle Huppert) and Michel (Olivier Gourmet) lead a happily isolated life with their kids on the edge of an abandoned highway. Relishing their distance from the rest of society, the clan stage makeshift hockey matches, sunbathe in deckchairs near the road, and hold au fresco picnics in their extended backyard. With two veterans from Michael Haneke's squirm-o-ramas playing the parents, however, it's only a matter of time for the secluded idyll to be disrupted, contaminated, and dismantled. When the highway is reopened, the onslaught of cars zipping noisily by their house suggests a swarm of giant insects invading a garden. The family fabric crumbles: Marthe can't fall asleep anymore, teenage daughter Marion (Madeleine Budd) becomes obsessed with the toxins released by the machines, and young Julien (Kacey Mottet Klein) goes from seeing adventure in the changes to succumbing to apathy.

Clammy provocation and surreal fable, Meier's film is predicated on thematic and sensory contrasts: nature and civilization, tranquil landscapes and roaring vehicles, sun-dappled spaciousness and barricaded claustrophobia. Sensitive to the smallest shifts in light, Agnès Godard's cinematography is also alert to widescreen visual gags, so that when sullen, bikini-clad daughter Julie (Adélaide Leroux) lounges before a honking traffic jam, the scene seems lifted straight out of Jacques Tati's Trafic. However, as Huppert's trademark ferociousness starts burning through Marthe's kooky-housewife façade and the family literally entombs itself away from the outside world by bricking up their house, Meier reveals cracks in their domestic life that weren't so much created as heightened by the intrusion of mechanized progress. Increasingly bizarre and despairing in its images of breakdown and rebirth, Home is finally hopeful in its view of familial bonds holding together as the characters are forced to face the far from idealized world they are inescapably a part of.