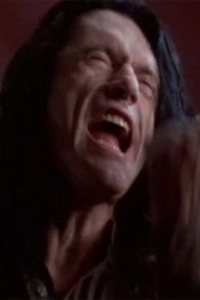 NOTE: Film starts at 10pm and will run just past 11:30pm (closing time for Euclid Autopark). Do not park in Euclid autopark else you will be ticketed when they close. Parking at meters is *free* past 5pm until 7am.

"I genuinely love The Room. I never have a bad time, which is why I've been eight or nine times so far. Oftentimes when I'm feeling down or depressed, I'll wish I could live forever in the dark space of The Room, where you can say whatever you want, people will laugh, and you never have to worry about the consequences of your actions. Forget booze, the real intoxicant is the film itself. Let the earnest ineptitude wash over you, and submit to the unholy power of The Room"
--Jon Danforth-Apell, The Room Superfan
35mm print