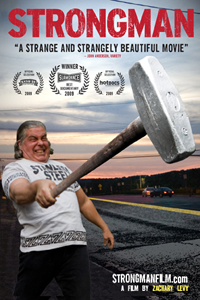 
One of the most poignant and hauntingly original American documentaries in years, Strongman tells the up-close-and-personal story of Stanley “Stanless Steel” Pleskun, who can lift dump trucks and bend pennies with his bare hands, but who struggles to transcend his chaotic New Jersey home life and the toll of his slowly-but-surely advancing age. Years in the making and assembled with rare skill and intelligence, Strongman is tender and tough, comic and tragic, simple and endlessly rich – a Fellini-esque testament (in the best sense) to the unlimited possibilities of independent, nonfiction filmmaking and the most hypnotic example of the Maysles-style “direct cinema” tradition in years. Winner of the Grand Jury Prize at the Slamdance Festival and a smash at the 2009 South-by-Southwest (SXSW) Film Festival. (113 min.) ---Elliot Wilhelm, Detroit Institute of the Arts