William S. Burroughs: A Man Within 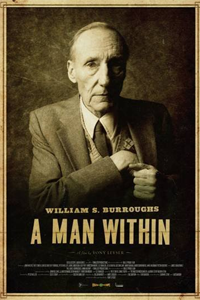 William S. Burroughs was the most patrician of the Beat writers, a scion of the Burroughs Adding Machine Company, but he was also the most scandalous. As filmmaker John Waters points out in Yony Leyser's engaging documentary, William S. Burroughs: A Man Within, the writer became famous "for things you were supposed to hide." Openly gay decades before Stonewall, addicted to heroin and notorious for accidentally killing his wife, Joan Vollmer, he cuts a larger than life figure. Literary types will swarm to this doc if they can find it in limited distribution.

Burroughs died in 1997 at the age of 83, nevertheless the author of Naked Lunch, Queer and Junky appears throughout the film, notably reading from his work and off in the fields around his Lawrence, Kansas home firing guns, an unsurprising hobby in a man who shot his spouse during a game of William Tell. As an elderly man, Burroughs cuts a spectral figure, yet among the sea of faces (many of them famous) that populate the documentary, his is the most commanding presence, his charm and charisma evident even in his diminished state.

In a scant 90 minutes, Leyser pulls together archival footage, animated sequences and scores of interviews. Among the people who make an appearance are writer/actor Marcus Ewert, Burroughs' last and decades younger lover; Naked Lunch screenwriter/director David Cronenberg and his star Peter Weller (who also serves as the doc's narrator); poet/playwright Amiri Baraka; poet Diane DiPrima; performance artist Laurie Anderson; and a plethora of pop stars, including Patti Smith (who writes about Burroughs in her recent memoir Just Kids), Thurston Moore, Lee Ranaldo, Jello Biafra, Genesis P-Orridge and an exuberant Iggy Pop. Viewpoints may differ between these and the film's other talking heads, but there are a few elements nearly all of the interviews have in common: affection and enthusiasm for the subject and an acknowledgement of the enormous influence this outlaw writer had on both his contemporaries and those who came after him.

Leyser has done his job with this, his first feature, burnishing Burroughs' legend and making manifest the enormous shadow he still casts over writers and artists of all stripe. It's a persuasive documentary; one that ought to gain Burroughs some new converts if the film itself can find a wide enough audience.

William S. Burroughs: A Man Within