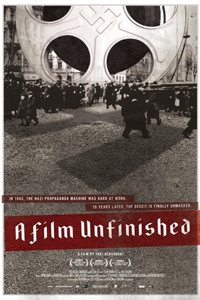 The Nazi propaganda machine's mission was simple if despicable: Use carefully selected words and images to justify dehumanization and genocide.

There's nothing simple, though, about A Film Unfinished, a remarkable new documentary that reminds us of film's inherent capacity for lying.

Director Yael Hersonski takes familiar footage of life in the Warsaw Ghetto and turns it into a macabre and somehow poetic hall of mirrors. Her ace in the hole: lost outtakes, recovered in 1998, showing how Nazi film crews directed Ghetto life to make it look tolerable. With the help of a cameraman's testimony and the diaries of Adam Czerniaków, Warsaw's Jewish council leader, we take in the staging of a live show (audience members were forced to laugh or else) and an elaborate feast, a cruel joke at a time when only the most fortunate Ghetto residents were lucky enough to eat horse meat. The emaciated faces we see here are walking ghosts: The Ghetto was liquidated and its residents executed shortly after the footage was shot.

We also see some of today's Ghetto survivors watching the footage alone in a dark theater. "Jews didn't bury their dead in coffin!" exclaims one survivor with disgust as she sees staged footage of a funeral procession. Indeed, as other parts of the footage show, corpses were often left lying on the Ghetto streets. In one sequence we see how film crews directed residents through multiple takes to walk past the dead bodies without paying heed. The Nazi suggestion: Only subhumans could behave in such a way. Propaganda works in many different ways.

A Film Unfinished, which showed earlier this year at VideoFest, takes abject imagery and turns it into an essential statement on why we bear witness. The film pulls back the curtain on a deadly PR machine and forces us to consider its deceptions.