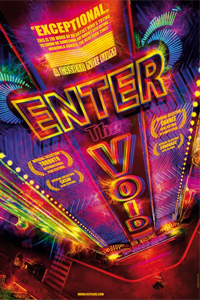 Whatever else its merits may be, Gaspar Noe's Enter the Void immediately enters the canon of first-person cinema. The highly subjective camera that depicts an experience from the point of view of one of the characters in a film has been a source of fascination and frustration in cinema for decades. Executed well, and in short bursts, it can be an effective tactic. For instance, there's a memorable sequence in Carl-Theodor Dreyer's Vampyr (1932) in which the camera seems to be placed inside a coffin and then carried through the streets. But 1947's The Lady in the Lake, a feature-length film noir shot entirely with a subjective camera, is an oft-discussed but somewhat goofy curio that is seldom actually dragged out into the light of day.

But advances in camera and camera-rig technology made more cinematographic gymnastics possible on set. Douglas Trumbull's Brainstorm (1983) really pushed the envelope with sequences showing what was captured by a gadget that sits atop your head, collects your brainwaves, and records your first-person experience – of sex, of white-water rafting, of death. Whatever. Director Kathryn Bigelow and writer James Cameron took the same idea a decade later and cyberpunked it up as Strange Days (1995), which opened with a truly extraordinary POV action sequence and later cooked up a frightening first-person rape scene.

Gaspar Noe shot a frightening rape scene for his Irreversible, though it wasn't in the first person – it was more like somebody ditched a camera on the ground, from which impassive vantage it caught the whole endless spectacle in graphic detail. There's nothing quite so vicious in Enter the Void, which is an altogether gentler movie – even a little naïve in its ambitions. The set-up is like something cooked up in a 3 a.m. blissed-out-stoner dorm-room rap session: a dose of DMT, a sexy girl, a copy of The Tibetan Book of the Dead. As soon as I saw that book appear on screen, I thought to myself, in my nasally smug inner-film-crit voice, “Ah, the jig is up. This film will be about reincarnation.” I held that expectation all the way through its running time, and it's an expectation the film certainly anticipates and encourages in a playful – and, at one juncture, a somewhat sadistic – manner. But, as it turns out, the film isn't about reincarnation at all. It's about the inside of the human brain, and it imagines the massive core dump that may take place when the light of the soul is snuffed out.

The blissed-out stoner referenced above is Oscar (Nathaniel Brown), an American expatriate living in Japan. The sexy girl is his sister, Linda (the never-not-nude Paz de la Huerta), whom he's recently brought to live with him in hopes of, well, protecting her from the world. The two of them, orphans, are together in the film's opening scenes and, before their sibling relationship is explained, they seem to act like lovers. (American audiences especially may read Oscar's brotherly love early on as erotic fixation, given the way Hollywood films have always used nudity and intimacy as code for sex.) At the very least he has an unreasonable fantasy that he'll be able to rebuild the comfortable and nurturing family life that he remembers from early childhood. For now, it's a tough existence. Oscar deals drugs for scratch and Linda strips at a Tokyo nightclub, where, Oscar worries, she's fucking her boss.

The camera generally follows close behind Oscar's head, looking over his shoulders at the world he faces — not strictly a POV shot in the Lady in the Lake sense, but something close to it. The tactic pays off by intensifying the film's sense of place and helping us imagine Oscar's sense of desperation. There's a languid drug trip early in the film that wallows a little pointlessly in an updated version of imagery swiped from 2001: A Space Odyssey, but before long, there's an actual action sequence: an acquaintance lures him into a drug sting; Oscar flees into a bathroom where he tries to ditch his product, but is shot multiple times by the Japanese police. Curled into a fetal position on the floor, huddled around a low Japanese toilet like so much discarded human tissue, he dies.

Or does he? For a long time, it seems as though the answer depends on what your definition of the word "dies" is. Having raised the prospect of reincarnation, Noe has his protagonist spend the rest of the movie, tantalizingly, in a very near-death state. The camera's view comes unmoored from Oscar's shoulders, with an overhead perspective that at first suggests an omniscient view. But it becomes clear that we're still in first-person mode. Oscar is having an out-of-body experience, and we're along for the ride.

SPOILER TERRITORY:
And what a ride — the camera floats and dives, taking in a cocktail of live-action photography and digital (not to mention digitally enhanced) imagery that makes Tokyo look ever more luminous and otherworldly. Some shots seem to depict a city that exists on a tabletop, full of dollhouses made entirely of neon. There are pleasant flashbacks to Oscar's childhood with Linda and upsetting ones to the terrible car accident that sent them to separate foster homes. Explicit sex acts are performed in a Tokyo "love hotel" by various inamoratos and inamoratas with God rays shining from their privates. At one point, the camera moves into a woman's vagina, where a huge penis thrusts toward and — I swear I'm not making this up — ejaculates at the audience. (At that point I really wanted to know what the late Stan Brakhage would have thought of Enter the Void.) We see, through Oscar's mind's eye, his mother's pale white breast and his sister's pink abortion.

I read that last item, on which the camera lingers almost lovingly, as a fat middle finger raised in the direction of reincarnation. Said medical procedure is staged in a way that can be read as a prelude to childbirth until you detect that not only is the environment too gloomy for natal care, but the instruments being deployed are of the wrong sort entirely. If you believe, as Noe seems to suggest, that Oscar is heading toward a reincarnation in the womb of his sister, abortion seems an especially cruel fate. (Not to mention that fixing the camera's gaze upon that particular spectacle could read as audience antagonism.) But the film seems to recover its underlying sense of Buddhist optimism as it careens once again toward rebirth, climaxing with a scene of Linda giving birth to the baby she conceived with Oscar's buddy Alex in the love hotel — an infant body that is, we should feel assured, inhabited by the soul of its own uncle. (Creepy!)

ut then again, no. In interviews, Noe has made a big deal out of one point — the woman in that last scene of childbirth is not Oscar's sister at all, but Oscar's mother. That means the film climaxes not with a triumphant resurrection, but with a mere flashback to Oscar's birth. This casts the film in a different light, of course. A dying Oscar, his brain primed for the experience by the surfeit of hallucinogens in his system, sees life flashing before his eyes. Not his life in linear mode, but a random-access collection of the things that make up the essential pieces of his consciousness at that place in time where consciousness ends: an abiding love for his sister, and for his mother; a fascination with the idea of sexual congress as a kind of highway for the soul to travel; a reverence for the immensity of the neon-drenched Tokyo night; and the terrible capacity to re-experience one dreadful moment — that car crash — over and over again and again. Noe is trying to create a fullness of character by expressing in intense, hallucinogenic detail, the kind of free-associating narrative that might spin through Oscar's head at the moment of death, as he bleeds out in a bathroom stall and wishes himself onto a higher plane.

If Enter the Void doesn't end with a new beginning, it at least describes some kind of circle. If you read it in the context of the theory of eternal recurrence, it qualifies as a happy ending — a return to blissful childhood, to be experienced anew as it was before unfeeling reality intruded on idealism and everything good went to hell. As an auteur, that's what Noe seems to lament most in this world — the loss of happiness, or at least contentedness, that comes in the wake of acts of great violence. So even though the movies are full of stimulating, often challenging imagery, they're rooted in a kind of sentimentality. Irreversible is so punishing and disorienting that once you've made your way through the shit to reach the film's mournful, humanistic conclusion, you feel as though something inutterably profound has happened to you.

Though it's apparently been much longer in gestation, Enter the Void feels a lot like a recapitulation of themes that were already explicated to devastating effect in the earlier film. I admire the extremity and flamboyance of Enter the Void's vision — it's definitely worth seeing on a theater screen — but it still revolves around Oscar, who is little more than a floating nostalgia factory, testifying weakly to childhood innocence lost. It's a terrific spectacle, but Oscar is a cliché and a non-starter, in thrall to a junkie's own misery from the first scenes. That emptiness leaves a big hole where the film's soul should be.