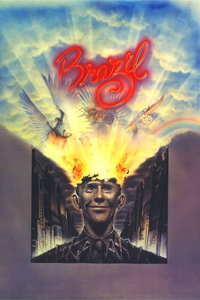 Sam Lowry, Brazil 's unlikely hero, lives in an automated apartment with the activity and inefficiency of a Rube Goldberg machine: Sam awakens, his window blinds open, a coat rack extends displaying an array of identical suits, and his breakfast toast is prepared by mechanized tongs. His job, in the Department of Records (a subsidiary of the Ministry of Information — the fictional equivalent of government) is similar in its routine and ascetic regularity.

The system is, of course, flawed on many levels (Sam's toast, in the aforementioned scene, comes out burnt). Legal paperwork (receipts, warrants, order forms) must accompany every transaction and interaction; it is this overwhelming formality for documentation, in addition to the lack of reliability in technology, that does not prohibit caustic error. ( Brazil 's principle conflict ensues in result of a squashed bug that lands in a typewriter.) As a gesture of calamity exclusively appropriate to this environment, explosions in Brazil (there is talk of terrorist bombings) cause showers of paperwork in their aftermath. They are showers of celebratory confetti, announcing a scar in a system bound in red tape.

The film is without debate Terry Gilliam's most ambitious work, referenced keenly in his prior efforts: Time Bandits has a fascistic game show that tempts contestants with elaborate and unnecessary home maintenance equipment; Gilliam's prologue for The Meaning of Life involves a mutiny against a consumerist corporation. It is a fascist and oppressively stark vision (its criticism and recommendation are regularly discrete), as known for its visual strength as it is for its Hollywood spawning. The latter fact is particularly ironic, as Brazil 's postponement (it was an American film first released overseas) mirrors the film's theme of corporate prohibition. Brazil was financed by Universal Pictures, and, due to a negatively crucial change of guard, drifted in editing for close to a year. To date, the film has been distributed in five cuts, ranging from a 94-minute version edited by Universal chairman Sid Shienberg to Gilliam's seminal 142-minute cut available exclusively on the Criterion DVD.

The distributional fate of Brazil is of note, secondly, because of Gilliam's success in securing his original vision, albeit slightly altered due to contractual limitations. Hollywood is notoriously plagued by commercial incentive and a lack of art; Brazil is a rare success, particularly so because it is decidedly anti-commercial. As an appropriate epilogue, the film barely recouped its fifteen million dollar budget.

Although ironically comedic Brazil is dense and ambiguous in its comedic intent; thusly, biographical references to Gilliam's affiliation with Monty Python are falsely suggestive in critiques of the film. Consider a late scene in which Sam is promoted to Information Retrieval and enters his new office. It is as small as a closet, economically paired with another so that a desk may be shared between the two. Sam arranges his papers and office trinkets (the film occurs at Christmas, and he receives them as gifts), and lowers his eyebrows in question as his desk slides slightly into the wall. He enters the adjacent office and distracts its tenant, leaving after he nudges the desk back towards his space. The scene is a clever and comedic sight gag, yet it is more useful (and less comedic) as a metaphor, either for Sam's discomfort or hierarchal competition.

Peripheral characters are dressed identically in attire that clearly relays their social rank, forwarding a notion of the individual's lack of identity — in Sam's second job, his name is even replaced with a serial number. His mother is seen distinctly throughout, and in each sequence is undergoing a comprehensive plastic surgery (literally; in once scene her face is held in saran wrap). By the film's end she becomes a physical and soulless replication, an attractive body (or, at least, she matches Sam's perception of beauty by resembling his fantasy girlfriend) and no soul. She is present at the funeral of her own, withered flesh.

The film contains two depicted terrorists and several citations of terrorist bombings, yet the arrival of one such character, Harry Tuttle, is an heroic asset to Sam. As Danny Peary attests: "Gilliam has made the bureaucracy so despicable and the general public so obnoxious that we're actually willing to accept a terrorist as a hero."

It is not necessary that Brazil 's setting resembles a natural one, though the comparison forwards the film's allegorical relevance. A rendition of Orwellian dystopia with the comic cynicism of Jacques Tati's masterpiece Playtime, Brazil is a parable of corporate dominance; it is an environment strewn in propagandistic slogans and scored with the unending rhythm of typewriter keys. There is no natural horizon; for the matter, there is no hint (until a brief shot at the film's end) of an uninhibited, natural freedom.

As a counterbalance to the "natural" corporate setting, Sam has dreams in which he is an armored, winged hero. He glides and flips through the sky, and protects a beautiful, angelic goddess. Sam's dreams are in fantastic, freed environments, and become contaminated and indistinguishable from his reality (a final conflict seems to occur in both settings). It is a suggestion that the government is fascistically contaminative, that even the freedom of dreams has been prohibited.

Such a fascistic corporate dynasty disenables the opportunity for a traditional hero, although Sam and his terrorist girlfriend attempt to battle it. Sam's final triumph (or tragedy), in turn, is entirely subjective. He is arrested by government doctors and lobotomized. His countenance is dumbly positive, and he stares, focused and undistracted, trapped if not permanently sedated. He has, however, escaped according to his own idealistic terms: in his dreams as a winged hero — it is an explanatory loophole for his heroic success.

— . Rumsey Taylor, Not Coming to a Theater Near You