No Crossover: The Trial of Allen Iverson 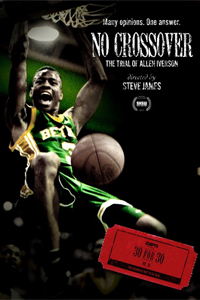 Steve James was finishing his breakthrough documentary Hoop Dreams in 1993 when Allen Iverson—then a high school basketball phenom in James's hometown of Hampton, Virginia—was arrested after a racially charged brawl and charged with a felony.

The ensuing trial inflamed racial animosity in Hampton and divided James's own parents. "My mom felt like he was being treated justly," James says. "My dad was saying, 'They went after the kid. It was too much.'"

Six years into Hoop Dreams, James wished he could make a film about the trial. "It seemed to have something to say about that community, and about struggles around race and sports," he says, "but I didn't have the time or the money to do it."

Because James prefers to document events as they unfold, he thought about the Iverson trial as a missed opportunity. But two years ago ESPN asked him to contribute to "30 for 30," an anniversary series of documentary retrospectives, and James saw his opening. His 80-minute film, No Crossover: The Trial of Allen Iverson, which he shot from October 2008 to September 2009 and is finishing this week, will have preview screenings January 31 and February 4 as part of the Gene Siskel Film Center's Stranger Than Fiction documentary festival. It'll officially premiere in March at South by Southwest, and ESPN will broadcast it on April 13.

Returning to Hampton, James found passions about the Iverson case running as hot as ever.

The longest continually occupied English-speaking settlement in the U.S. and once a major port in the slave trade, Hampton celebrates its 400th birthday this year. It's a city of 150,000 where whites barely outnumber blacks and high school sports are a very big deal. James's father, Billy, a football star for Hampton High School in the 30s, could remember black kids watching the games from trees near the field—they weren't allowed in the stands. Before his death in 2004, Billy would be one of only a few white fans left in those stands.

James's mother, Imogene, was the nurse at another local high school, Pembroke, when the public schools were integrated in 1969. "There were fears that it would be contentious, that it would be terrible," James says; a school in nearby Williamsburg had been wracked by two weeks of violence after Martin Luther King's assassination the year before. But at Pembroke, "it was surprising how smoothly it went."

James started high school there the following year. As a sophomore he transferred to Hampton for its stronger basketball program, and in 1973 he was named the varsity's MVP. In the film he recalls white Hampton students on one side of the gym cheering for white players and black students on the other, cheering for black players. "It was a competition to see who could cheer louder," he says.

James studied radio journalism at James Madison University in Harrisonburg, Virginia, then came to Illinois to get his master's in film at SIU in Carbondale. In 1986 he and a former SIU classmate, Frederick Marx, approached Chicago's Kartemquin Films with a proposal to make the documentary that would become Hoop Dreams. Kartemquin connected them with cameraman Peter Gilbert, and for the next four and a half years they followed the tumultuous high school careers of inner-city basketball hopefuls Arthur Agee and William Gates. Championed by critics Roger Ebert and Gene Siskel, who'd seen an early version of the film, Hoop Dreams was sold to Fine Line Features at the 1994 Sundance Film Festival, went on to gross $7.8 million—more than any documentary before it—and helped launch the ongoing documentary boom.

When Iverson was arrested in '93, James already knew who he was; Billy had been sending his son clippings about the star athlete. Born to a 15-year-old single mother with a drug problem, Iverson grew up in Hampton with a coke-dealing stepfather and in the Stuart Gardens projects in neighboring Newport News, where he reportedly saw his best friend knifed to death. As a junior quarterback Iverson led Hampton High's rival, Bethel High School, to a state football championship; then he changed uniforms and on the basketball court became one of the top-rated high school point guards in the country.

That Valentine's Day, in 1993, he scored 42 points in a basketball game and then went bowling with a group of fellow black jocks from Bethel. A 22-year-old white man reportedly called Iverson "nigger" and a black-on-white brawl broke out, with combatants on both sides throwing chairs. Several white bystanders were injured; one sustained a broken arm, another a concussion.

Police concluded that the white combatants had acted in self-defense, and none was charged. But Iverson and three other black teens were charged as adults with "maiming by mob"—a felony under a rarely used statute written to prosecute Klan lynchings.

"While we couldn't link specific people to specific acts, each defendant was responsible for what occurred," local prosecutor Colleen Killilea (now a judge) told Sports Illustrated during the trial.

Thousands of supporters, most of them black, rallied on behalf of the teens and raised money for their defense. "Iverson's prowess as an athlete, coupled with what was perceived as his attitude and his privileged status, clearly play a role in his being arrested and charged as an adult," says James. (Iverson missed 69 days of school that year in addition to being charged with a felony, but he was allowed to go on playing and he led Bethel to the state basketball championship too.) But ultimately, he adds, they also helped to free him.

Iverson and two other defendants were convicted and sentenced to 15 years in prison, with 10 years of the sentence suspended. The fourth defendant, tried separately, was convicted of a misdemeanor and got probation. "If it had been a white athlete of his stature, I find it hard to believe they would have given him a 15-year sentence for that crime, even if you believe he's guilty," James says. Still, he got lighter treatment than his codefendants: Iverson was remanded to the minimum-security Newport News City Farm, while they were sent to the rougher Hampton City Jail.

Iverson's athletic career looked like it was over. But activists pressured Virginia's outgoing governor, Douglas Wilder—the nation's first black governor—to grant Iverson partial clemency after four months at the City Farm. He was released on supervision, and a few weeks later, in an apparent afterthought, so were his codefendants. In 1995 all their convictions were overturned on appeal.

James is known for his skill at getting people to open up about difficult subjects; in Stevie, a 2002 documentary about Stevie Fielding, a sex abuse victim he'd taken on as a "little brother" while James was at SIU, Fielding and various members of his family speak with astonishing intimacy after he's arrested for molesting a relative. The Iverson project put James's skill to the test. "I had a harder time with this film than any other film I've done," he says. When Joyce Hobson, a Hampton High teacher who organized a support group for Iverson and his codefendants in '93, finally agreed to talk to James, she told him on camera that she'd been reluctant because he was white and "it's critical for African-Americans to tell our own stories."

Some of the people James wanted to talk to never came around. Black and white, they told him they feared retribution from coworkers and neighbors. Even James's own mother was "nervous about how she'd come off," he says, though he did manage to convince her to appear in the film.

"White people tend not to want to think about race," James says. "It's harder for them to talk about it. If you took the position that Iverson did something pretty bad and should pay a high price for it, that's a harder thing to say without people saying you're racist."

Iverson went on to play two years for the Georgetown Hoyas, then joined the Philadelphia 76ers as the NBA's number one draft pick. He played ten years for the Sixers, four of them as the NBA's top scorer, then bounced between other teams for a few years, briefly retired, then returned to the Sixers this past December. In '97 he was arrested for illegal possession of a gun and marijuana and was sentenced to community service. Charges in 2002 that he'd threatened two men with a gun while looking for his wife after a domestic dispute were dropped.

Iverson "throws himself into the game and is so fearless, but he has not always played team basketball," says James. "Most of the great players who have won lots of rings have at a certain point realized that they can't do it alone. He never quite got there. He was a scrawny little guy and what got him where he was were these qualities of bravado and toughness. He's spent his life trying to prove himself, over and over."

Iverson wouldn't speak for the film either, but "we've endeavored to make sure he's heard" through clips from past interviews, says James. The closest the filmmaker got to his subject was when he attended Iverson's 2009 Camp Crossover basketball clinic for kids, which the star staged in Hampton for the first time in four years. We see Iverson tearfully award a scholarship and play in a celebrity "all-star game" before a conspicuously homogenous crowd.

No Crossover: The Trial of Allen Iverson