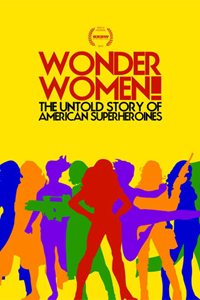 Ask the average person to name some of their favorite female superheroes and you probably won’t get a lengthy response. Ask them to name their favorite female action heroes of the big screen and you’ll probably be greeted by near silence. That probably isn’t a surprise to most of us; I mean we probably all know that the worlds of comic books and action movies have historically been male-dominated. But director Kristy Guevara-Flanagan brilliantly highlights the impact of this situation by focusing primarily on the story of Wonder Woman, probably the female superhero that first springs to many people’s minds, and the impact she has had on girls and women since her creation in 1941.

Truth be told, I was only minimally aware of Wonder Woman’s history before seeing this film. Created by William Moulton Marston, an interesting figure himself, she was originally a strong feminist character that combined the powers of male superheroes such as Superman with a strong desire for peace. The creator of the systolic blood pressure test, which was used in the development of the lie detector test, it’s interesting that Marston also gave Wonder Woman the “lasso of truth,” which she could use to force people to speak the truth. And as the film points out, what could be scarier to most men than women having a device that could be used to force us to speak the truth? Evidently, the early Wonder Woman comics also featured a disproportionate number of female bondage images, a source for controversy among scholars of the character.

Not surprisingly, it wasn’t long before Wonder Woman’s character was robbed of much of it’s feminist quality as American society took a more conservative turn post-WWII. It wasn’t really until the Second Wave Feminist movement when the character was embraced as a feminist symbol, even being featured on the cover of the first Ms. magazine with the byline “Wonder Woman for President.” And, of course, it wasn’t much later that the TV series featuring Lynda Carter made its debut and the film wisely includes footage of Carter discussing her role as the iconic superhero.

But more than a history of Wonder Woman, Wonder Women uses that history as a springboard for a broader discussion of women’s roles in popular culture and the history of female empowerment over the last 70 or so years. Other notable interviewees include Gloria Steinem, Lindsay Wagner (The Bionic Woman) and Kathleen Hanna (Le Tigre), whose commentary on the Spice Girl’s appropriation of the term “Girl Power” is a joy to watch.

What becomes clear from viewing Wonder Women is that Wonder Woman’s appeal and influence for the last seventy years among females is just as much due to a scarcity of competition as it is to the appeal of the character. Sadly, there simply aren’t that many options out there for girls to look to. And it is in interview footage with ordinary girls and women (who it quickly becomes clear are anything but ordinary) talking about their own aspirations and relationships to Wonder Woman that the film is most powerful. When Katie Pineda, a 4th grader with a noticeable stammer, talks about her personal struggles in school and how she is sometimes picked on, she makes it clear that her favorite superheroes inspire her belief that she will someday be stronger and better. Listening to Katie, the dearth of strong female characters for her to emulate becomes all too real and depressing.