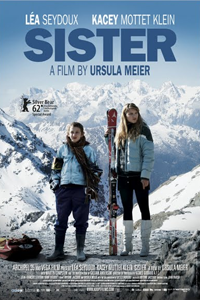 Midway through Sister (L'enfant d'en haut) someone asks about Simon and Louise's mother. The siblings trade a knowing look and say what they probably always say: we have a pretty fucked-up family.

Life at the Bottom

Simon and Louise (Kacey Mottet Klein and Léa Seydoux) live at the foot of a mountain, a gondola-ride away from the ski resort up top. They live in a lonely high-rise tower, apparently built for seasonal workers.

Simon is about 11. He steals skis, goggles, gloves, and other equipment from the skiers at the resort. He even steals food from backpacks and brings it home for him and his older sister to eat. He fixes up the skis, then sells them to friends who have parents with money. When he arrives at the sledding hill, a line of school chums forms to buy professional-quality equipment at a five-finger discount.

Inevitably, Simon gets noticed stealing at the resort, but he's lucky that the first person to spot him is Mike, a Scottish seasonal worker who isn't above a little theft himself -- especially when Simon tells him frankly that he doesn't use the money to buy video games or DVDs, but pasta, toilet paper, peanut butter, and other essentials for himself and his sister.

Louise is a young woman, maybe 20, who is working her way through a series of boyfriends. The first one we meet drives a very old VW Golf. She tells him to fuck off, but then later that night, goes out to meet him. The next boyfriend is a step up: he drives a red BMW.

Sister is told from Simon's point of view, so we don't know for sure what Louise's economic situation is -- she doesn't seem to be charging money for sex per se, but rather hoping for the right rich boyfriend to turn up. Though she is the older sibling, it is Simon who seems to provide the stability and income in their apartment -- unless Mr. Red BMW happens to work out.

Up on the mountain, Simon makes another connection. A woman is skiing with two small children, and he helps the kids adjust their bindings correctly. You get the sense that Simon wishes he had a mother just like this woman. When they meet again later at a lunch table, it's awkward, especially when Simon brings up the issue of money, but you can almost feel the pull he feels toward this matronly figure.

Two-thirds of the way through, there is a major development that I won't reveal here, and it begins to unravel the lives of these unhappy, unlucky people. Writer-director Ursula Meier's triumph is that by now, we know the characters well enough to understand why they cope the way they do. There's a sense of fatalism, of watching a car crash in slow motion, as the world collapses around them. Because we know them so well, we sense that there really isn't a good way out, and we feel defeated too on their behalf.

The believable and complex characters make Sister engaging. The crime and plot developments make it tense. But what really makes Sister a good film is that director Ursula Meier and editor Nelly Quettier tell the story impeccably. I've recently mentioned David Bordwell's How To Watch an Art Movie, and it's still on my mind. The takeaway is that in a good art movie, every shot (or every scene) tells you something new, even shots that on the surface might seem slow or boring.

I could choose from several examples in Sister, but how about this one: Simon is in bed, asleep. We hear his sister come in with her boyfriend. Simon sits up, breaks off the filters from two cigarettes, sticks them in his ears, and rolls back over to go to sleep. In a single shot of one character, Meier has conveyed that another character is in the habit of bringing men home for sex. It conveys that Simon has worked out a fairly elaborate system for blocking the unpleasant sound, and that it happens so often than he can execute the maneuver his sleep. It also conveys that cigarettes are always at hand in the house, and that Simon doesn't particularly like Louise bringing new boyfriends home.

Sister is one of the best (of many) films I've seen for DFF. My only reservation is that the movie doesn't seem to know how to end. There is a "perfect" last shot that is both fatalistic yet hopeful, but for me it doesn't really resonate with the current emotion, nor sum up the story. It seems too perfectly metaphorical, yet not directly related to what's happening at the moment. Leading up to the last shot there were several shots seemed slow and aimless too. I'm not sure what the best ending would be, but I don't think Meier quite found it.

Still, Sister is one of the most emotionally powerful and carefully crafted films I've seen for DFF this year, and it comes with a genuine recommendation.