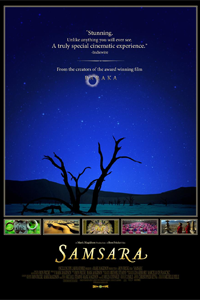 It's been 19 years since Ron Fricke's last film, Baraka, was released. I'm grateful that he wasn't done making films, because Samsara is excellent.

I first saw Fricke's work in Godfrey Reggio's Koyaanisqatsi, one of my favorite films. Fricke was the cinematographer who broke ground with time-lapse motion photography. By leaving the shutter open longer, he turned taillights into corpuscles. By mounting the camera on a special tripod, he integrated graceful panning and tracking shots that took hours to execute.

Baraka was his first feature, and it was filmed using many of the same techniques, in amazing 70mm. I don't think Baraka is as good a feature-length film as Koyaanisqatsi -- the shots are great and some sequences are good, but it isn't as strong a 90-minute composition.

I think Samsara is also better than Baraka. It holds together better, I like the music better, and the themes are better developed.

As with the other films mentioned above, Samsara is a composition in film and music. There are images of monasteries, villages, and pure nature. There are images of faces and masks, and vague creations in-between. Later, there are images of production lines and junk piles making the great material-consumer cycle from life to death and rebirth anew. The music ranges from monastic chanting and gongs to electronically hip fusions of voices, gongs, and drum machines.

The assemblage doesn't tell a literal story, but there is a story arc. The film has about 18 discrete segments, each joined with surprising or inspired segues. Fricke and editor ** really know what they are doing. Across the various segments are repeated themes. For example, there is a segment showing abandoned civilizations. Start with the Anasazi dwellings of mesa verde, transition to a sand-blown house being swallowed by a desert, then introduce post-Katrina New Orleans. A contrasting cut takes us to a crystal chandelier in Versailles with delicate cherubim and seraphim, and then we continue to a cut of a cherubic American child being baptized in a church. These young Christians recall the young Buddhists we saw earlier at the monastery, making a deeper connection to other parts of the film.

The opening shot is of a girl's face wearing an artificial expression of something between surprise and contentment. The facial expression is part of a dance, as though it were a mask. Before the opening sequence ends, we will see the frozen faces of mummies, then the golden mask of an Egyptian king. Throughout the film Fricke finds human expression in faces and masks; a performance artist makes faces of clay on his own face, a scientist has crossed the uncanny valley with an electronic twin, and the sex industry makes sex dolls without head (perhaps the heads are just finished separately), and turns men into girls.

Many of my favorite documentaries from recent years are recapitulated in Samsara. Manufactured Landscapes showed us the detritus of the west being picked apart by Asian workers, then showed different Asian workers assembling new junk for the west to use up. Our Daily Bread and Food, Inc.both showed us what it takes to produce food on a large, industrialized scale. Even the Qatsi trilogy seems to have been nodded at, with Samsara 's sulfur miners recalling the gold miners at the beginning of Powaqqatsi.

But Samsara doesn't feel like it's repeating what's already been said. Where those documentaries were literal and objective, Samsara uses those scenes of modern life in a musical and artistic composition about the human condition. Samsara would be a great film to show a space alien about what life is like on Earth, the good and the bad, all set to appropriate and intriguing music.

Samsara was shot in Super 70 -- meaning the original negative is dense and detailed. So for example, in the scene of Mecca, you can see each of the tens of thousands of worshippers circling and bowing individually. Samsara is a movie that deserves to be seen on the biggest screen with the best projection you can find. I've been fortunate enough to see it twice and I look forward to revisiting it again (and again).