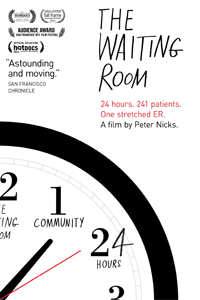 With the scrupulously realistic and ultimately optimistic The Waiting Room, Peter Nicks creates what appears to be a chronicle of a day in the life of an overburdened Oakland hospital's emergency room, while actually doing something considerably more complex and ambitious. Cherry-picking his main stories from dozens shot over five months in 2010, he homes in on just how emergency rooms function as primary care practitioners for the vast majority of our country's uninsured.

Most of the patients who come to Highland Hospital's ER are either recently unemployed or chronically underemployed. Almost all are dealing with conditions—diabetes, high blood pressure, strep throat—that would be fairly routine if they could afford regular doctors' visits and needed medication, but that easily become serious, even fatal, without those things. Nicks says he was inspired to make the film by his wife, a speech pathologist at the hospital, who "told me about the struggles and resilience of her patient population." That insider perspective may explain how Nicks's camera seemingly gets in everywhere, documenting emotionally charged interactions between patients and hospital staff without any signs that the subjects are being made to feel self-conscious or that they're behavior is being affected.

It may also explain the film's complete absence of cynicism about the hospital, which appears to be staffed by universally caring, respectful, and competent professionals. The patients may be beleaguered, broke, and either scared or in pain, and many leave even worse off financially than they came in, thanks to ER bills they're not quite poor enough to avoid being responsible for. But the waiting room where all but the true (and relatively rare) emergency cases must bide their time for hours is more sanctuary than purgatory, thanks mainly to Cynthia Y. Johnson, the unfailingly kind CNA who manages it. Johnson checks people in and keeps the crowded room running smoothly, infusing it with a crucial sense of humanity and humor.

Nicks hopes to use his film as the basis of "a location-based social media and community engagement initiative" aimed at empowering underserved patients and injecting their perspectives into our seemingly endless debate over the Affordable Care Act. It remains to be seen whether his social media experiment can move that two-ton needle, but his film does its part, illuminating the dignity and worth of its subjects. By the end, when an antsy patient asks Johnson how long her wait will be and the CNA replies, "I just want you to turn around and see all the beautiful people here," we know just what she means. As Nicks does what she suggests, panning slowly around the room, his camera reveals not the entitled self-styled victims of Mitt Romney's America, but a collection of vibrant and self-respecting individuals.