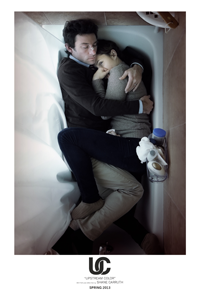 What can we say? We bagged a premiere for something that, as of this writing, has yet to even premiere at Sundance. We're very excited to show this, because it's from the director of PRIMER - that very cool indie and sci-fi flick we screened when that first came out. This one? This one is going to be totally different. But our hands are tied. All we can do is tell you what's in the 2012 Sundance catalog, so here goes:

Kris is derailed from her life when she is drugged by a small-time thief. But something bigger is going on. She is unknowingly drawn into the life cycle of a presence that permeates the microscopic world, moving to nematodes, plant life, livestock, and back again. Along the way, she finds another being—a familiar, who is equally consumed by the larger force. The two search urgently for a place of safety within each other as they struggle to assemble the loose fragments of their wrecked lives.

Shane Carruth’s sensuously directed and much anticipated sophomore effort (his feature debut, Primer, won the Sundance Film Festival 2004 Grand Jury Prize) is a truly remarkable film that lies beyond the power of language to communicate while it delivers a cohesive sensory experience. With its muscular cinematic language rooted in the powerful yearnings felt before words can be formed, Upstream Color is an entirely original, mythic, romantic thriller that goes in search of truths that lie just beyond our reach. - S. F.

Shane Carruth’s first film, Primer, premiered at the 2004 Sundance Film Festival, where it won the Grand Jury Prize in the U.S. Dramatic Competition. Upstream Color is his second film.