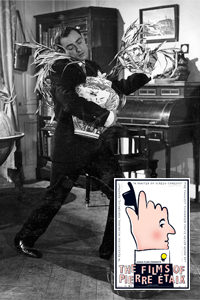 (1962) Under family pressure, astronomy geek Etaix decides to find a fiancée, but is first perpetually sidetracked. Then even while he can’t get rid of a harddrinking brunette, he creates a shrine in his room to a Swedish chanteuse — a more than life-size cutout of her the centerpiece — but what is that monolingual Swedish au pair trying to tell him? Etaix’s practically dialogue-less performance in his first feature is an homage to silent comedy (particularly Keaton’s Seven Chances). Approx. 81 min. 35mm.