As Long As You're Healthy 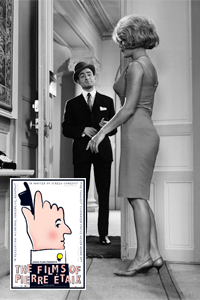 (1966) Life’s tough in the modern era in four segments: insomniac Etaix whiles away the night with a book on vampires — then his wife wakes up!; no seats at a packed cinéma, or they’re blocked, or immediately reclaimed — and then the adverts begin: a devastating satire on commercials; shrink Etaix has it rougher than his patients; and the bickering between a picnicking couple and a farmer escalates into hilarious gunfire and electrocution. Approx. 65 min. 35mm.

As Long As You're Healthy