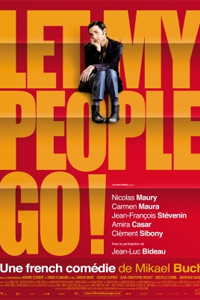 A sweet and hilarious fusion of gay romantic comedy, Jewish family drama and French bedroom farce, Mikael Buch’s Let My People Go! follows the travails and daydreams of the lovelorn Reuben (Regular Lovers’ Nicolas Maury), a French-Jewish gay mailman living in fairytale Finland (where he got his MA in “Comparative Sauna Cultures”) with his gorgeous Nordic boyfriend. But just before Passover, a series of mishaps and a lovers’ quarrel exile the heartbroken Reuben back to Paris and his zany family—including Almodovar goddess Carmen Maura (Women on the Verge of a Nervous Breakdown, Volver) as his ditzy mom, and Truffaut regular Jean-François Stévenin as his lothario father. Scripted by director Mikael Buch and renowned arthouse auteur Christophe Honoré (Love Songs), Let My People Go! both celebrates and upends Jewish and gay stereotypes with wit, gusto and style to spare. The result is deeply heartwarming, fabulously kitschy and hysterically funny.