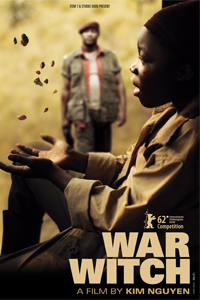 Rebelle (War Witch) has a lot in common with 2010's Incendies. Like Denis Villeneuve's masterpiece, Rebelle is Canada's official selection for the Foreign Language Academy Award, but not about Canada at all. It's set in a war-torn environment that is never identified by name (in Incendies it's probably Lebanon, in Rebelle it's probably Burma.) It portrays the ugliest aspects of humanity with sublime beauty and grace. It is unflinching in its harrowing portrayal of internecine warfare, it leaves your nerves shattered and your heart racing at the raw power of what's happening on screen. If Incendies and Rebelle are the start of a new trend in Canadian cinema that steps outside of our boring borders, then don't expect any rebellion from me.

Komona (Rachel Mwanza) is only 14 years old when she is forced by rebel soldiers to kill her own parents. The guerillas abduct her from her native village, enlist her in their brutal campaign, march her through dense jungles, and beat her when she is too tired to go on. When Komona emerges as the sole survivor of a fierce firefight, the rebel leader Great Tiger pronounces her a "War Witch." Her new position as spiritual advisor means that she is expected to work miracles on a regular basis, or feel the wrath of Great Tiger. Komona's only chance of salvation appears to be Magicien (Serge Kanyinda), a headstrong albino boy who falls in love with her and proves that he is willing to do anything for her love in return. Komona and Magicien flee the rebels and roam the lawless wastelands, seeking a new life. There is a flicker of hope, but the shadow of tragedy looms over all.

There is poetry in all of this. Komona provides sparse narration, recounting the story to her unborn child as a kind of cautionary tale. The framing device helps to filter adult themes through the innocent perspective of youth in a manner reminiscent of Days of Heaven. The cinematography by DOP Nicolas Bolduc is vivid and hallucinatory, and an atmosphere of magic realism pervades each frame. Komona actually does seem to have spiritual powers. She sees ghosts in the jungle, creepy chalk-white corpses who haunt her waking life. The ghosts of her parents sometimes appear, urging her to return to her native village and bury them. The symbolic significance of albinism is lost on me, but it makes for some striking visuals. At one point, Komona and Magicien visit a small community of albinos in a search of an elusive white rooster needed to seal their marriage. It is one of the few moments of lightness and levity in the story. Combine these stylistic devices with the astonishing performance by an unknown actress as the scrappy heroine, and Rebelle is like a dark companion piece to Beasts of the Southern Wild.

Writer/director Kim Nguyen worked passionately on this project for 10 years, and it's a monumental achievement. He shot the film in the Democratic Republic of the Congo for the verisimilitude it provided, even though it would have been exponentially simpler and less dangerous to film elsewhere. Financing was surely hard to come by, especially in the CanCon straightjacket of our domestic film industry. To top it off, human atrocity is difficult subject matter. I will never acclimatize to the image of a child with an assault rifle. Stories like this are scary for investors, who generally don't respond positively to "trust me, it will be nominated for an Oscar." Nguyen is to be commended, then, for bravely overcoming whatever obstacles he faced in making this film and triumphing with a work of consummate excellence. This film suggests a way for Canadian films to be relevant in the world arena. When our homegrown stories lack the necessary drama, we can treat our cinema like a UN peacekeeping mission.