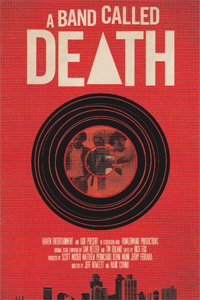 How would you feel if music you had recorded, a film you had made or a book you had written that had been unknown and buried for decades was suddenly discovered by your child? That’s exactly what happens with A BAND CALLED DEATH. The story of the Hackney brothers and their 70's rock/punk band, this is a story some 35 years in the making.

Filmmakers Jeff Howlett and Mark Covino take us back in time to 1970's Detroit and brothers Dannis, Bobby and David Hackney. Garage band musicians, David proved himself to be their leader with ideas and musical styling way ahead of their time. Citing major musical influences as Roger Daltry and Pete Townsend of The Who, Alice Cooper and the guitar stylings of Jimmy Hendrix, when combining the elements of these rock legends with the vision of the Hackney boys, the result was bombastic, and led to a band called Death. Struggling to get a record deal but never giving up on their music, demo tapes were made and ultimately returned to the boys when no label would sign them.

Years passed. Death was buried in the past as Dannis and Bobby went on to other ventures and David passed away in 2000 from lung cancer. But a strange thing happened in the music world. Several of the 500 45rpm records that Death self-pressed with two of their songs back in the 70's, popped up in record stores. Music historians and rock/punk fans were blown away by the music and while the internet lit up with articles about the songs and people searching for information on the group Death, the songs made their way onto the web as well with countless downloads to young music enthusiasts across the country, including one, Urian Hackney, son of Bobby Hackney. "That’s my dad’s voice!" And indeed it was. And with that hand of Fate, the long buried dreams of Death became a reality.

As the documentary takes us down memory lane with archival footage, current concert footage and intimate interviews with, among others, Bobby and Dannis Hackney and Bobby’s three sons who themselves now cover Death songs with their band, Rough Francis, the story unfolds on how Death finally saw their first album, "...For the Whole World to See", released by Drag City Records in 2008 after the discovery of the 1974 demo tapes in Bobby Sr.’s attic following the excitement buzzing in the music world about this "new" group. We get to see the soul of each of these men, and welcomingly embrace their belief in God, in each other and in the memory of their brother David. There are moments that are so personal, so powerful, that you will have tears streaming down your face, particularly to see Death perform and to see the look on a father’s face as he watches his own children perform his songs. Electrifying divine inspiration. Priceless.

This is one of the best rockumentary documentaries you will ever see.