The Princess Bride: Quote Along 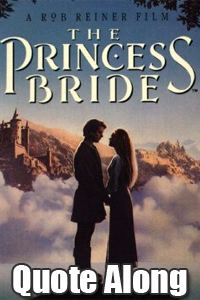 "Hello, my name is Inigo Montoya. You killed my father. Prepare to die."

Is there a more quotable line from ANY movie than that one? Well, that quote or maybe the whole "Mawwage" thing...or I guess the "As you wish" is pretty iconic, too. Oh gosh darn it! Every line in THE PRINCESS BRIDE has transformed from mere lines in a script to gospel that melts even the coldest of hearts.

Inconceivable you say? Well the Action Pack challenges you to a duel of words with our PRINCESS BRIDE Quote-Along! Join Westley as be duels Vizzini and his crew, braves the dangers of the fire swamp, and overcomes death for true love. We'll have all your favorite lines subtitled up on screen karaoke-style for your quoting pleasure, inflatable swords for early birds to fight and dramatically switch hands with, and other door prizes. So lace up your boots, draw your swords, and prepare for a miracle because this is true love. You think this happens every day?

The Princess Bride: Quote Along