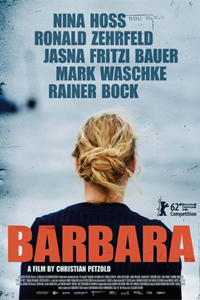 It takes a lot of confidence, not to mention nerve, for a small German film to arrive in theaters in the heart of the holiday season and face off against the formidable behemoths of Hollywood. "Barbara," however, has a secret weapon: It's one terrific film, as smart, thoughtful and emotionally involving as just about anything that's out there.

Winner of the Berlin Film Festival's Silver Bear for writer-director Christian Petzold and starring a luminous Nina Hoss, Petzold's frequent collaborator and one of Germany's top actresses, "Barbara" has another advantage: its Soviet-era, behind-the-Iron Curtain setting allows it to investigate the kinds of complex and compelling moral dilemmas endemic to that time and place.

As films such as the Oscar-winning "The Lives of Others" and the little-seen "Kawasaki's Rose" have demonstrated, the dynamics of trying to maintain your humanity in the face of the terrifying reach of police state control makes for the highest level of drama. Despite tea party polemics to the contrary, these situations have no parallels in the American experience, which may be part of the reason we find them so compelling.

Petzold, whose previous work, including "Yella" and "Jerichow" was not widely seen in this country, is a subtle and understated director, and "Barbara" is too good a film to posit a stark choice between an evil East Germany and the paradise to be found on the western side. Every situation, every choice, is personal, and reality is always complex.

The year is 1980 and "Barbara" opens with the title character getting off a bus in a small town in East Germany where, we soon learn, she has in effect been exiled. A doctor who once worked in a top institution in Berlin, Barbara broke the rules by applying for an exit visa from the Communist-run German Democratic Republic, and as a result has now been assigned to an unimpressive pediatric hospital in the provinces.

Watching her from an upstairs window as she smokes a cigarette are two men — Andre (Ronald Zehrfeld) the doctor who will be her supervisor, and Klaus Schutz (Rainer Bock) the representative of the Stasi, the GDR secret police with tentacles in every aspect of life.

The humorless, implacable Schutz contemptuously describes Barbara as "sulky," and she does keep to herself both inside the hospital and outside. The reasons for this are quickly made clear: The Stasi has Barbara under almost constant surveillance, complete with randomly timed and humiliating physical searches, and she is in fact still hoping to escape to the West for reasons that are as much romantic as political.

The young and affable Andre's connection to this situation is more multi-faceted than it at first seems. Though he initially appears to be simply a friendly guy wanting to help with her transition, Barbara immediately suspects, and correctly so, that he is also a Stasi informant, someone who will be reporting to the secret police about her on a regular basis.

Whatever else Barbara is, she is an effective and committed doctor who is invested in her patients' well-being. When a difficult young woman named Stella (Jasna Fritzi Bauer), an inmate in a local work camp, is admitted, Barbara immediately diagnoses her problem as meningitis.

Because Barbara is the only doctor the defiant Stella allows near her, the two develop a relationship, and Barbara even begins to read to Stella from the adventures of another rebel, Mark Twain's Huck Finn.

Also getting increasingly complicated is Barbara's relationship to altruistic fellow doctor Andre. He is clearly attracted to her, and she is impressed by his dedication to medicine, his passion to help his patients no matter how much time and work it takes.

Though Barbara and Andre unavoidably get closer, the one thing she cannot confide in him, for both personal and political reasons, is her continued interest in the West. As events play out and the screenplay takes unexpected turns, Barbara (played by Hoss with complete mastery) has to make the extremely difficult choice between different kinds of love and caring, and must decide what is finally important in her life.