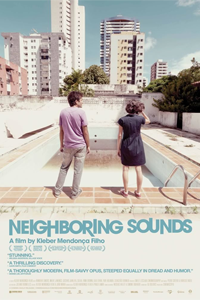 “Neighboring Sounds,” Kleber Mendonça Filho’s revelatory debut feature, takes place mostly on a wealthy block in the northeastern Brazilian city of Recife. Identical, gleaming white high-rises — some with fancy names like Vivaldi, Westminster and Camille Claudel — dominate the skyline, obscuring the nearby ocean and also the urban poverty that has been central to Brazil’s social and cinematic identity for decades.

The pristine apartments, with their freshly painted walls, sleek appliances and large flat-screen televisions, look like generic enclaves of privilege. We might be anywhere. And some of the events that occur inside those walls could be episodes in a global soap opera of domestic banality set in Singapore or San Francisco or Cape Town or Dubai. An exasperated housewife, whose children are tutored in English and Mandarin, tries to silence the barking dog next door; a rich man’s maid has an affair with a security guard; residents hold a meeting to complain about a doorman who has been sleeping on the job.

The characters in this densely populated movie can be roughly divided into masters and servants, and you notice just how much labor — ironing clothes, refilling water coolers, delivering packages, opening doors, selling drugs — goes into maintaining the leisure class in its life of ease. But Mr. Mendonça, a former film critic whose command of the medium is both formidable and subtle, is up to something more than the usual upstairs-downstairs comedy of colliding destinies in a small place. The scope of his movie is narrow, but its ambitions are enormous, and it accomplishes nothing less than the illumination of the peculiar state of Brazilian (and not only Brazilian) society.

“Neighboring Sounds” is divided into three chapters, each with the word “guard” in the title, and one of the movie’s themes is the intimate relationship between security and paranoia. There are metal grates and surveillance cameras, and also a private force of muscular men in brown vests patrolling the street at night. Their leader is Clodoaldo (Irandhir Santos), a smooth-talking salesman whose friendly reassurances have a strangely menacing undercurrent. In any case, the anxiety that it is his job to dispel (and perhaps also to inspire) never really goes away, and neither does the haunting sense that something terrible is always lurking just beyond the frame. It may be that the more protection you have, the less safe you feel.

Mr. Mendonça’s camera tiptoes through rooms like one of the intruders that are sometimes glimpsed on rooftops or in corridors, and it exposes a world of complex relationships and simmering contradictions. And also of ordinary people going about their daily business. João (Gustavo Jahn) wakes up with Sofia (Irma Brown) after their first night together, and their bliss is marred by the discovery that the CD player has been stolen from Sofia’s car. João suspects that the thief is his cousin Dinho (Yuri Holanda), the black sheep of a big, powerful family ruled by João and Dinho’s grandfather Francisco (W. J. Solha). Most of the real estate we survey in “Neighboring Sounds” belongs to Francisco, who also owns a grand, crumbling sugar plantation in the countryside.

When João and Sofia go there for a visit, it may seem like a picturesque excursion, a scenic break from the sterile high-rises of Recife. But the plantation is hardly a neutral tourist destination. In a recent interview in The New York Times, Mr. Mendonça said that he wanted to move away from the urban slums and rural landscapes that have defined Brazilian cinema since the 1960s and to explore the realities of a newly prosperous and fast-growing nation. He has done that, but he also shows how those older, other Brazils persist and cast their shadows across the shiny surfaces of modernity.

But shadows might be the wrong word. What we see is mostly bright sunshine and fluorescent light. As the film’s title suggests, it is sound that carries unsettling implications of danger. We always hear more than we see: footsteps upstairs or outside; sirens and crashes in the night; whispering voices and humming machines. With his sound designer, Pablo Lamar, Mr. Mendonça has created the aural landscape of a horror movie.

And, for much of its running time, a thriller without a plot. The tension that suffuses the routines of everyday life is as hard to identify as it is to avoid, so that a late swerve toward violence, while surprising, also seems inevitable, the silent turn of an invisible wheel of fate. No one can quite see or hear what is coming, but something is out there, just on the other side of the whatever we think keeps us safe.