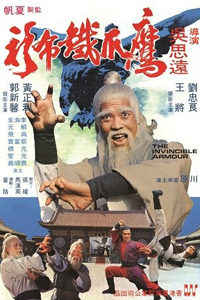 Dan Halsted (head programmer at the Hollywood Theater in Portland) drove a semi-truck to Vancouver to rescue a rare collection of 35mm Kung Fu films. This is your one chance, barring crazy luck or a trip to Portland, to ever watch these prints on film and in their original aspect ratio.
Hwang Jang Lee is an evil white-haired Eagle Claw villain, and master of the impenetrable “Iron Armour Technique”. When a young kung fu warrior is framed for murder, he’s forced to run for his life from the vicious villain. Now the young fighter must survive an onslaught of kung fu assaults, and master the "Iron Finger Style" to combat the crazed Eagle Claw master. This is wall to wall kung fu action featuring non-stop fight scenes, a ripped off Spaghetti Western soundtrack, and amazing fight choreography by Master Yuen Woo Ping. — Dan Halsted