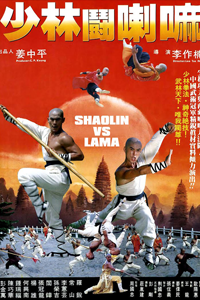 Dan Halsted (head programmer at the Hollywood Theater in Portland) drove a semi-truck to Vancouver to rescue a rare collection of 35mm Kung Fu films. This is your one chance, barring crazy luck or a trip to Portland, to ever watch these prints on film and in their original aspect ratio.
A Tibetan Lama (not a llama) steals a sacred Shaolin manual outlining all 72 kung fu fighting styles. At the same time, a young street fighter goes to the Shaolin Temple and meets an alcoholic kung fu master who agrees to train him. The Lama villain becomes an unstoppable master who begins to unleash his fury at Shaolin, resulting in a flurry of vicious kung fu fights. Now it's up to the young fighter to save the day with his "Buddha Finger" technique. — Dan Halsted