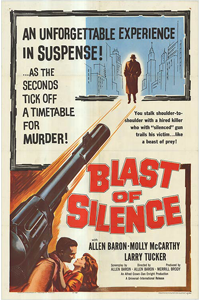 Allen Baron’s stark, moody Blast of Silence (1961) is a movie of many strange distinctions. It’s among the last of the true film noirs, those fatalistic black-and-white urban crime dramas that darkened the American screen so gloriously in the years after World War II. It was, along with John Cassavetes’s Shadows (1959) and Shirley Clarke’s The Connection (1960), one of the first of the low-budget independent movies that suggested the existence of a uniquely New York style of filmmaking, documentary-like and expressively unpolished (though Blast of Silence has more plot, and a much more tightly constructed screenplay, than Cassavetes and Clarke would likely have felt comfortable with). It’s among the very few works in the history of cinema to boast a voice-over narration in the second person. And it is, hands down, the best movie ever made about a common, important, and unjustly neglected American experience: the really bad business trip.

The film’s protagonist, Frankie Bono (played by Baron, who also wrote and directed), is a Cleveland hit man with a contract to terminate—for reasons he neither knows nor cares to know—a middle-management New York mobster named Troiano (Peter H. Clune). The killer comes to town by rail, arriving, appropriately, at Penn Station, which was, like him, doomed: less than five years after Blast of Silence was shot, the old station we see in the opening scenes was demolished. Frankie doesn’t last nearly as long.

I don’t think I’m spoiling any surprises here. Noir heroes often don’t make it all the way to “The End,” and in this picture, even more than most, there’s death in the air right from the start. The opening shot—an image of birth, represented as the light at the end of the train tunnel bringing Frankie, on his grim mission, to New York—is more ominous than joyful. The words “blessed event” do not spring to mind as we watch this character being born to his brief life on-screen. Indeed, even before we’ve laid eyes on Frankie, we have heard, in the blackness of the tunnel, a deep, gravelly, disembodied voice intoning a dire monologue on the meaning of this new arrival: “You were born in pain,” says the voice—which is, uncredited, that of the blacklisted actor Lionel Stander. “You were born with hate and anger built in.” In his detachment and eerie omniscience, the speaker seems godlike, and this thought generates, let’s say, a certain unease in the viewer. If God sounds like Lionel Stander, we’re probably all in big trouble.

The gloomy narration, which winds through the picture like one of New York’s twistier subway lines, was written (under the pseudonym Mel Davenport) by Waldo Salt, another blacklistee. Despite the contributions of Stander and Salt, Blast of Silence has virtually no measurable political content. The out-of-work lefties somehow fit in, though, because the film’s dominant mood is that of profound, chronic, terminal alienation. It’s a movie about an outsider, and it seems to have been made by people who knew exactly how he feels.

At the time Blast of Silence was shot (in 1959 and 1960), Baron was an occasional actor and a former comic-book illustrator who thought he could make a movie and had managed to raise the twenty grand or so he needed to turn out something that would look reasonably professional. Although Baron was a native New Yorker, Brooklyn bred, he chose to film a story about a man who is not: a tense, wary out-of-towner who, like so many who come to Manhattan from smaller, less daunting places, responds to the perceived hostility of the city with some pretty serious hostility of his own. In those days, of course, making a movie in New York—three thousand miles from Hollywood and on a budget even a studio B movie would be ashamed of—was an uncommon and risky venture, and at least a trace of chip-on-the-shoulder attitude is discernible in every Gotham indie of that era: a sense of alienation was, as this movie’s narrator might say, built in.

And Baron has the wit (or the instinct) to turn that uncomfortable feeling to the movie’s advantage. Maybe the most impressive thing about this debut feature is how rigorously its inexperienced director sustains a mood of endemic existential anxiety, of a pervasive wrongness in the world. In a way, it’s fortunate that Peter Falk, whom Baron had cast as Frankie Bono, was unable to play the part. (Falk opted to take the role of a different hit man, in Burt Balaban’s 1960 Murder, Inc.) Baron’s a lesser actor, obviously, but his relative lack of ease before the camera lends a little extra edge of tension to this already tightly wound character. There’s a weird poignancy in his stiffness. As Baron plays the character, Frankie looks like a man who’d be an out-of-towner anywhere on earth. He’s a stranger in his own skin.

The whole movie, in fact, has the melancholy aura of something displaced, of a traveling salesman’s loneliness. Frankie’s big-city business trip leaves him, as such excursions often do, with a lot of empty hours: too much time to kill, you might say. After performing the routine preliminaries of stalking his prey and developing a plan of action, he’s forced to hang around for a couple of days, awaiting delivery of the gun and silencer he’s ordered from an odious, shifty-eyed, morbidly obese local dealer named Big Ralph (Larry Tucker). Rather than sit and brood in the stunningly depressing East Village hotel he has checked himself into, Frankie wanders the city streets by day and by night, but can’t find much to distract him there either, because he has come at the wrong time. It’s Christmastime, a season that (as Stander growlingly informs us) evokes nothing but bad memories in this angry, solitary man: all the seasonal cheer around him just turns him back on himself, and that’s the last place he wants to be.

Although this holiday motif might sound like a too facile irony, Baron (with the help of his inventive cinematographer, Merrill Brody) makes it work by emphasizing, in a longish nocturnal montage, the almost comic visual incongruity of Frankie’s self-absorption as he walks past the bright window displays on Fifth Avenue. He looks straight ahead, as if he weren’t there at all, as if the life of the great city simply had no reality for him: it might as well be a rear projection.

Blast of Silence, despite its graphic vigor and its documentary-like immediacy, shares some of its hero’s radical isolation from his surroundings: a stubborn neither-here-nor-thereness and—especially now, nearly half a century later—a haunting sense of being somehow suspended in time. When the picture was released, film noir was effectively over, and the era of hit-man chic ushered in by Tarantino’s Pulp Fiction was still more than three decades in the future. It’s commercially dangerous for any work of popular art to be either behind the times or too far ahead of them. Blast of Silence—yet another strange distinction—is both.

The movie had a bit of success, though, even in 1961. It was picked up for distribution by Universal (which opened it on the bottom of double bills), was generally well reviewed, and won a critics’ prize at the Locarno film festival. And over the years, Blast of Silence has, like a particularly scary local hoodlum, acquired a small reputation. Martin Scorsese, who was studying film at NYU when the picture came out, regularly cites it as a key New York movie, and periodically it gets “rediscovered” and dragged out of the shadows into the glare of the international film festival circuit: it impressed the cineastes in attendance at the Munich film festival in 1990 and was screened at Cannes in 2006.

Among the film’s cast and crew, fates varied. Neither the cinematographer, Merrill Brody, nor the leading lady, Molly McCarthy, was much heard from in the years that followed. Larry Tucker, who plays the creepy Ralphie, had a memorable role as the madman Pagliacci in Samuel Fuller’s Shock Corridor (1963), but by the late sixties was better known as the writing partner of Paul Mazursky, with whom he collaborated on three screenplays, including Mazursky’s breakthrough, Bob & Carol & Ted & Alice (1969). Lionel Stander, working largely in Europe (most indelibly, perhaps, in Roman Polanski’s 1966 absurdist thriller Cul de Sac), remained a very busy character actor for the rest of his life, which ended in 1994. Waldo Salt won two Oscars, for the screenplays of Midnight Cowboy (1969) and Coming Home (1978).

And Allen Baron, the prime mover of Blast of Silence, wound up directing hundreds of episodes of series television, none of which, it’s probably safe to say, even remotely resembled his striking debut film. (The shows he worked on ranged from The Dukes of Hazzard and Charlie’s Angels to—on the high end—Kolchak: The Night Stalker.) He’s credited as the director of just three more feature films—Terror in the City (1964), Outside In (a.k.a. Red, White, and Busted, 1972), and Foxfire Light (1982)—which remain stubbornly unrediscovered. This may not have been the career he had in mind when he turned his camera on the streets of New York City in 1959 or when he emerged, two years later, with this radiantly bleak, end-of-the-line noir. In an interview with German television in the early 1990s—seen in the making-of documentary Requiem for a Killer—he suggested wistfully that instead of going to Hollywood after his first feature he should perhaps have stayed in his home city and made more of “the kinds of films I know how to make.” Films, that is, like Blast of Silence, with its bone-deep noir fatalism, its pervasive conviction that things never work out the way we’ve planned.

But Allen Baron, unlike his luckless hero, has survived. He hasn’t directed a TV show in better than twenty years. He has begun painting again, and is preparing a series of abstract canvases for a gallery show, his first, in Los Angeles. He still sounds like a New Yorker. New Yorkers feel noirish a lot of the time, but not always. Sometimes they even manage to remember the truth uttered by one of the city’s great sages, a contemporary of Baron’s named Lawrence Peter Berra. It ain’t over till it’s over, he said, and New Yorkers never argue with Yogi.