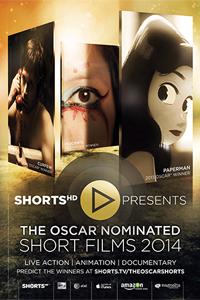 Feral USA / 13min Daniel Sousa and Dan Golden. A wild boy is found in the woods by a solitary hunter and brought back to civilization. Alienated by a strange new environment, the boy tries to adapt by using the same strategies that kept him safe in the forest.

Get a Horse! USA / 6min Lauren MacMullan and Dorothy McKim. Walt Disney Animation Studios’ innovative new short “Get A Horse!” is a contemporary homage to the first animated shorts featuring Mickey Mouse, with all-new, black-and-white, hand-drawn animation that’s paired with full-color, 3D, CG filmmaking—in the same frame. Mickey (voice of Walt Disney), his favorite gal pal Minnie Mouse and their friends Horace Horsecollar and Clarabelle Cow delight in a musical haywagon ride—until Peg-Leg Pete shows up and tries to run them off the road. This groundbreaking short takes a sharp turn when Mickey finds himself separated from Minnie and must use every trick up his sleeve to find his way back to her. Directed by Lauren MacMullan and produced by Dorothy McKim, “Get A Horse!” is in theaters in front of “Frozen”.

Mr. Hublot Luxembourg/France / 11min Laurent Witz and Alexandre Espigares. Mr Hublot lives in a world where characters are made partially of mechanical parts, driving huge vehicles, rub shoulders with each other. A world where the giant scale of machines and the relentless use of salvaged materials reign supreme. A withdrawn, idiosyncratic character with OCD, Mr Hublot is scared of change and the outside world. His solution: he doesn't step foot outside his apartment! The arrival of the dog Robot Pet will turn his life upside down: he has to share his home with this very invasive companion...

Possessions Japan / 14min Shuhei Morita - A man seeking shelter from a storm in a dilapidated shrine encounters a series of household objects inhabited by goblin spirits.

Room on the Broom UK / 25min Max Lang and Jan Lachauer - A genial witch and her cat are joined on their broom by several friends as they set off on an adventure.