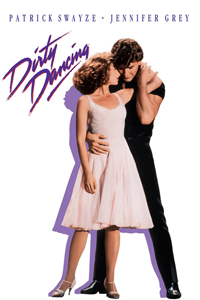 Unabashedly schmaltzy, DIRTY DANCING is also a lot of fun. Jennifer Grey is touching as the shy and idealistic Baby, whose sexuality is awakened by Patrick Swayze's energy. Both are exceptionally well cast, and their skillful and convincing performances bolster some of the story's weaker elements, like the many stock characters and predictable events.

Frances "Baby" Houseman (Jennifer Grey) and her family spend their summer vacation at a Catskills resort where Johnny Castle (Patrick Swayze) works. Baby runs into this handsome dance instructor from the wrong side of the tracks at a forbidden, wild "dirty dance" party his friends throw after work. To supplement their meager earnings, Johnny and his partner Penny do a mambo show at a neighboring hotel. When Penny gets pregnant by one of the hotel waiters, she finds out the only time she can get an abortion is the night of a big show. The naïve Baby steps in determined to help, asking her father for abortion money and no questions asked before desperately trying to learn the mambo in time. Romance takes off, as it should, on the dance floor with a great '60s soundtrack (a cute touch: many of the tunes have "baby" somewhere in the title). Johnny's drawn to Baby's fierce optimism and Baby is drawn to -- well, he's Patrick Swayze! They're found out, of course, and come back together for one last dance.

Swayze is given some of the worst dialogue here, and it's remarkable that he's able to make the immortal line "Nobody puts Baby in a corner" sound almost natural. Teens will get past such corny dialogue because of the dance sequences which effectively mirror Baby and Johnny's emotions. As the two become more drawn to each other, the dancing becomes more seductive, culminating in the liberating energy of the final scene.