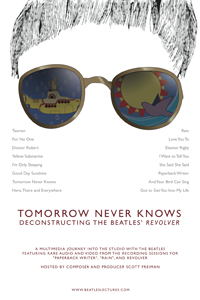 The Beatles' Revolver is a groundbreaking album that routinely tops "Best Album" lists. In Tomorrow Never Knows: Deconstructing The Beatles' Revolver, composer/producer and Beatles expert Scott Freiman takes music fans young and old on a journey through this remarkable album.

The 1966 album launched a period of studio experimentation for the Beatles that coincided with the end of their concert performances. With memorable songs, such as "Eleanor Rigby", "Yellow Submarine", and "Tomorrow Never Knows", the Beatles pushed popular music to a place it had never been.

Using rare audio and video clips, as well as anecdotes about the creation of the songs, Tomorrow Never Knows: Deconstructing The Beatles' Revolver, explores the groundbreaking production techniques that went into producing this landmark piece of music history. In addition to many of the tracks from Revolver, Mr. Freiman will also explore the creation of two other songs recorded during the same time period, "Paperback Writer" and "Rain".