Deconstructing the Beatles: A Trip through Strawberry Fields 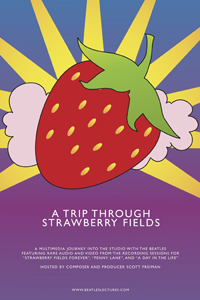 In "A Trip Through Strawberry Fields", Scott explores the creation of these two masterpieces with special attention to the evolution of the songs from demos to final recordings. The presentation also includes an in-depth look at Sgt. Pepper's "A Day In The Life" -- one of the Beatles' most remarkable achievements.

Deconstructing the Beatles: A Trip through Strawberry Fields