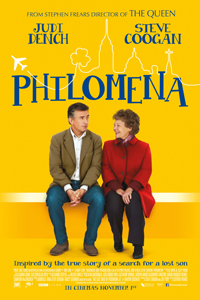 A nation’s cinema knows it has its mojo back when devil-may-care risks are taken with star casting. In Philomena, a truth-based British drama/charmer about a mother re-seeking the son she was forced to surrender for adoption at age three, Judi Dench, that laser sensibility of stage and screen, plays the title mum, an intellectually challenged Irish biddy whose main reading is Mills & Boon. The performer normally known as Alan Partridge, idiot to the paying public, plays an intelligent journalist. Steve Coogan also co-scripted and co-produced, further evidence of un-Partridgean mental prowess.

Martin Sixsmith (Coogan) was the actual writer-reporter who befriended Philomena Lee and book-chronicled her motherly quest. Both characters start out as seeming candidates for medical help. Sixsmith has cancer worries. Doctor in opening scene: “Stool sample outstanding.” Martin: “Oh thank you.” Medic: “No; we still need it . . . ” “Phil”, we recognise early, has a more cinematic ailment: flashback syndrome. She and we are battered by re-glimpses of the Magdalen-style convent where, 50 years before, girls’ sins were laundered along with the linen and teenaged mothers were purged of their unwanted – or even, as in Phil’s case, wanted – kids. Baby-selling was big business, apparently, for the Sisters of Mercy.

The odd-couple odyssey that ensues is forlorn, funny, poignant, instructive and utterly winning. Coogan, suaved up with a salt-and-pepper coiffure, doesn’t suppress all Partridge-ism. (When Phil says she has a titanium replacement hip she gets the doofus sally: “I’ll have to oil you. Like the Tin Man.”) Dame Judi, donning simple-minded simple-heartedness like motley, shows a few exposed flashes of shrewdness. Perhaps they are Phil’s own. When son Anthony’s possible gayness is spoken of, the mother seems at first not to have heard. Minutes later she says she always knew he might be a “bi-curious” boy.

Stephen Frears’ direction is “look, no hands” masterly. He doesn’t editorialise. Sometimes he barely inflects. He allows a full transparency for nuance and paradox, for surprise grace-notes and deftly limned ambiguities. This is a doleful, radiant, understated comedy of hope and faith. That’s almost a definition of good British cinema.