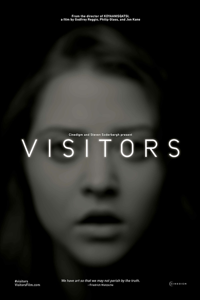 Godfrey Reggio's new film Visitors is not a "-qatsi" movie like his previous films Koyaanisqatsi and Powaqqatsi. It is presented in deep, dark, rich, black and white. There are very few shots in Visitors, probably one or two per minute, which lends the movie a slow pace which is bad for adrenalin junkies but good for contemplation. Philip Glass again provides the score.

Visitors appears to be an extension of Reggio's 7-minute film, Evidence. (Reggio brought Evidence to the IFS several years ago, fulfilling a a special request from yours truly.) That film is composed of closeups of children's unblinking gazes, staring directly into the camera. Reggio had set up a system of mirrors so that the kids were watching television while the camera watched them. The point was to capture the dumb, glassy, vacant stare that TV induces in us.

The first two-thirds of Visitors is dominated by long takes of faces staring at the camera in the same fashion as Evidence. What they are staring at, we never know.

At first, many of the faces stare without emotion, suggesting that they're looking at something banal. TV? Facebook? A mirror? Slow-motion closeups on hands performing mouse and touchpad gestures suggest that the Internet might be involved. But there is also a pair of hands playing an invisible piano, so it seems there isn't just one single, judgmental message.

Reggio later suggests that some of the people are themselves in a theater, that they are we, the audience. Far from the glassy stares of children looking at television, these people are engaged and expressive as they watch. Are they actors doing as told? Or are they subjects in an auditorium watching a live sporting event while Reggio records them? Are they more expressive because they're seeing film instead of TV? Because they're watching sports and not cartoons? Reggio doesn't say.

One could almost image a game of telephone where the first audience of Visitors is filmed and then used as the footage to show to the second audience, and so on.

The staring faces dominate, but they are not the only shots in the film. The first shot, in fact, is a beautifully lit portrait of a gorilla, staring at the camera as all those people later will. After a minute, the camera pans down, through blackness to the surface of the moon, and after another minute pans back up a set of pillars in front of an imposing building with "Novus Ordo Seclorum" on its lintel.

The low-angle shots of the building recur, each as ominous as the last. The planetary perspective plus the conflation of a gorilla with human subjects makes me wonder if "Visitors" is who the film is for, rather than what the film is about. Reggio wouldn't be the first filmmaker who set out to record our human condition as an explanation for some future alien visitor.

Until this point, Visitors is an artistic experiment that I was happy to participate in. But Reggio closes with a third act that seemed arbitrary and disconnected. This footage is shot in a Louisiana bayou. There are trees with knotty roots just above the water, and shore birds, and abstract shots of gulls that recall a film from last year called Leviathan.

The shot of a bulldozer pushing garbage seemed like a heavyhanded message, assuming Reggio was condemning ecological damage. And the setting -- a swamp -- seemed an arbitrary landscape to photograph. Why not a desert, a forest, a coral reef, or a city?

Reggio does bring the film to a thematic close by coming back to the global perspective and our handsome gorilla, but then ruins the sense of completion with a gratuitous shot under the credits, upside-down, of drops of dye blending with water. "Gratuitous" because it's a low-tech trick that was never set up earlier in the film.

So what does it all mean? Did it succeed? Did I like it? Those question always haunted me when I was being exposed to art films, but I've learned that most art films aren't puzzles. They don't have secret rules that decode the film into one-sentence sound bites. Art films invite you to engage, to bring yourself, and to simply experience the sensory input.

So it is with Visitors. I liked the experience for the first hour but found the last third less satisfying. Whether you'll be fascinated or bored depends largely on your attitude.