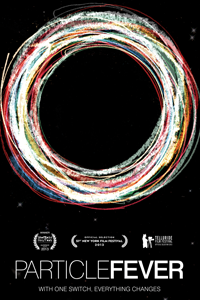 The promotional notes for the terrific documentary “Particle Fever,” which chronicles the search by physicists for the elusive Higgs boson, or “God particle,” proudly exclaim: “Imagine being able to watch as Edison turned on the first light bulb, or as Franklin received his first jolt of electricity.”

For once, the hype isn’t far from the truth. In “Particle Fever,” directed by former physicist Mark Levinson, we are actually present at the moment on July 4, 2012, when researchers at CERN, the European laboratory for particle physics near Geneva, announced the results of proton-smashing experiments from its Large Hadron Collider essentially confirming evidence of a “Higgs-like” particle – the last missing piece of the Standard Model of particle physics.

It took several decades and billions of dollars for nearly 10,000 scientists sharing data on 100,000 computers in 100 countries to arrive at this point. Assuming the results hold, I suppose some will still ask, “Why bother?” At an Aspen Institute forum, physicist David Kaplan, the film’s co-producer and one of its half-dozen featured scientists, is asked this very question by – who else? – an economist, who wonders whether the discovery will have any practical applications. Kaplan is self-effacingly blunt in his response: “It could be nothing – except for understanding everything.” One of the underlying themes of “Particle Fever” is the way in which an entire field of science can hinge on a single event. More than that, it’s a movie that asks if we have reached, or will ever reach, the limits of human knowledge. The youngish scientists represented here by Kaplan and other standouts, including Princeton theorist Nima Arkani-Hamed and experimentalist Monica Dunford, are well aware of their place in history; they know that the Higgs investigations represent their generation’s only true shot at scientific immortality. And yet they are supercautious about supercolliders – they know how easily data can be misinterpreted, how the lust for Nobel Prizes can derange good science.